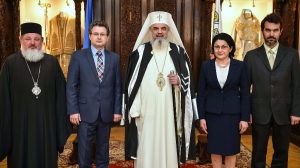 The Romanian Orthodox Church Patriarch, his Beatitude Daniel, received the Doctor Honoris Causa degree from the Bucharest Polytechnic University, in a private ceremony that took place at the Patriarchy’s Museum, on Thursday, April 14.

This award comes as the Orthodox Church is losing support among the higher-educated young urban people, who have been criticizing the church’s leaders for their efforts to build grand worship places, such as the People’s Salvation Cathedral, rather than helping those in need.

The University awarded this title to Patriarch Daniel as a recognition of his support to Romanian education and for the role the Church took in relation to the education institutions, to ensure the continuity of the ancestral faith, according to a press release issued by the University. The Bucharest Polytechnic University is one of the country’s top higher education institutions, which supplies thousands of IT specialists and engineers. The University’s senate is run by former education minister Ecaterina Andronescu, an important member of the Social Democrat Party (PSD).

“I accept this honoris causa doctorate to underline the importance of the connection between the University and the Church for the common good of our society,” Patriarch Daniel said, according to the Patriarchy’s official newswire basilica.ro.

The award ceremony was initially supposed to take place at the Polytechnic University’s Senate Hall, but on Thursday morning the Patriarchy issued a press release saying that Patriarch Daniel couldn’t attend the ceremony due to personal reasons and asked for it to be rescheduled at a later date.

However, in the evening, the Patriarchy’s publication basilica.ro announced that the ceremony took place. The only media present at the event were the church’s TV station, radio, and newswire.

The song states that people are more likely to find god in some small wooden church somewhere in the countryside than in an imposing cathedral made of concrete, a transparent reference to the People’s Salvation Cathedral that’s currently being built near the Parliament’s Palace in Bucharest.

The video ignited heated debates in the social media and divided people into two groups: those who agreed to the song’s message and those who claimed that the message was in fact a message against the Orthodox Church and the ancestral faith of the Romanian people.

“Although the song passes on a message against the People’s Salvation Cathedral project, we don’t consider it an anti-Christian or anti-religious song. It expresses the points of view of some artists who prefer a specific type of church architecture,” was the Patriarchy’s position in this debate.

A few days after launching the video, Taxi took it down from Youtube, after one of the artists who featured in it said he hadn’t been told what the project was about. Taxi also said they would reload the video after the Easter holidays.