As the ‎new roof starts taking its form, atop our beloved New York City Cathedral, the saving of Saint Sava Cathedral has truly begun.

The principal steel roof trusses are now in place, bolted and welded, tying together the previously freestanding historic stone walls. With the imminent installation of the metal-deck roof covering – presently stacked on the roof framing and ready for distribution, as seen in the photos – the trusses will become further braced laterally, thereby contributing to the general stability of the building as a whole. 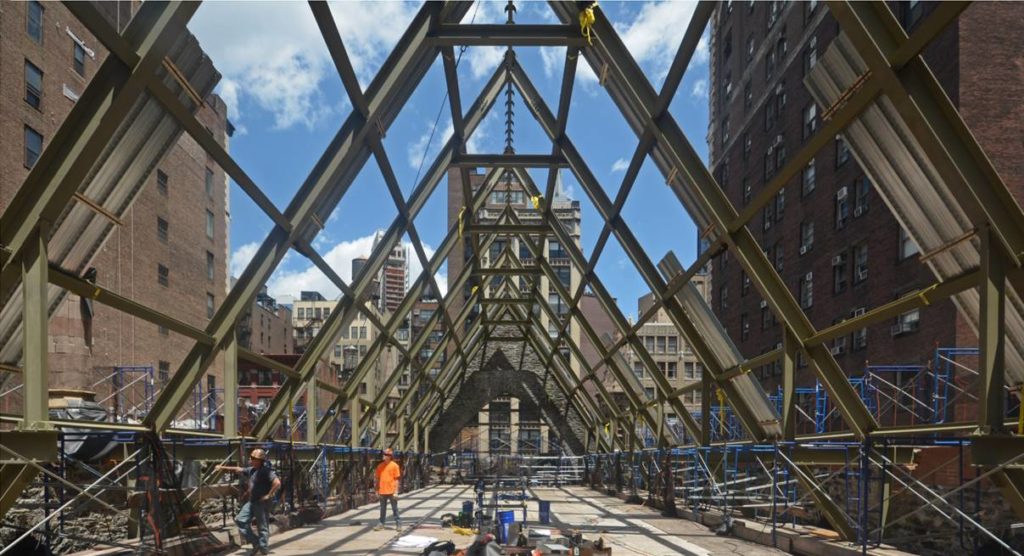 There has been much preparatory work, of course, to be able to get to this part of the reconstruction work:  including the removal of large piles of post-fire debris and dangerously weakened inside decorative-Caen stone facings (a Jurassic limestone quarried in north-western France near the city of Caen, formed in shallow water lagoons in the Bathonian Age about 167 million years ago!), as well as the painstaking repair and reinforcement of the remaining, structural granite and brown stone walls and the preparation of their top surfaces to receive the new roof-framing.

In addition to the physical labor, there have been a multitude of meetings with the New York City Department of Buildings and Landmarks Preservation Commission, along with the detailed preparation of a succession of technical drawings and other documentation to facilitate both construction and city approvals. These are just some among the many efforts involved in bringing the resurrection of our church to fruition.

At this moment, we give particular thanks our Resurrected Lord Jesus Christ and to our own patron Saint Sava, for the structural stabilization of the Cathedral having been finally achieved, and herein acknowledge the untiring work of our pre-eminent Project Team, in getting us to this point.