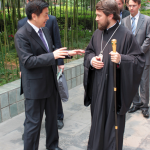 On June 19, 2012, the second consultations were held by the Russian-Chinese group for contacts and cooperation in religious sphere at the PRC State Administration for Religious Affairs (SARA) in Beijing.

The group was established in accordance with the memorandum of understanding on the development of Russian-Chinese contacts and cooperation in religious sphere concluded between the Russian Federation’s Presidential Council for Cooperation with Religious Organizations and the PRC State Administration for Religious Affairs. The group has worked in the format of consultations, with the first consultations held on June 8, 2011, in Moscow.

The Russian side included Metropolitan Hilarion, head Moscow Patriarchate’s department for external church relations and leader of the Presidential Council’s working group for contacts and cooperation with the People’s Republic of China in religious sphere, and members of the working group including Rushan-hazrat Abbyasov, vice-chairman of the Council of Muftis in Russia, Gelong Sanjey-lama of the Buddhist Traditional Sangha in Moscow, and D. Petrovsky of the DECR. Participating in the negotiations were also Ye. Tomikhin, minister-counsellor of the Russian embassy in China, and other Russian diplomats.

The Chinese participants in the talks included Zhang Lebin, SARA deputy director, Ms Go Wei, director of the SARA department for international relations, Ms Liu Zinguan, director of the SARA Forth Department, and other staff members of the SARA. There were also representatives of the PRC Foreign Ministry’s department for European and Central Asia. Among those invited to take part in the talks were also Bishop Joseph Ma Yinglin, president of the Chinese Bishops’ Conference in China, Mustafa Yang Zhibo, vice-chairman of the Chinese Islamic Association, and Zun Sing, vice-chairman of the Chinese Buddhists Association.

The participants in the consultations held in two sessions discussed the present situation of religious organizations in Russia and China including a set of problems involved in the situation of Orthodoxy in China. The sides emphasized the importance of developing relations between religious circles in Russia and China and noted the contribution made by religious confessions in the strengthening and broadening of relations between the two countries.