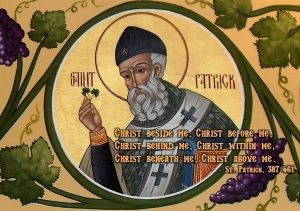 Moscow, March 27, Interfax – The Moscow Patriarchate will continue including names of the saints venerated in the West in its calendar.

“This process is not completed, it has only started,” head of the Synodal Department for External Church Relations Metropolitan Hilarion of Volokolamsk said on the Church and the World program on the Rossiya-24 TV channel.

As was reported, in early March the Moscow Patriarchate included in its calendar St. Patrick and 15 ancient saints glorified in the countries of Europe before the church schism of 1054. St. Patrick the Enlightener of Ireland was among them. It was decided that he would be commemorated on March 30.

According to Metropolitan Hilarion, these saints were included on request of the Russian Orthodox dioceses in Western Europe.

“There are also other western saints that I hope will be soon included in the calendar of our Church,” Metropolitan Hilarion said.

He explained that the main criterion for including the name of the saint in the calendar is veneration of the saint in a certain locality. Besides, this saint should live before the church schism of 1054, “as everything that happened afterwards is a separate history of the Orthodox Church and the Catholic Church.”

The hierarch noted that it was important that the person had not participated in struggle against Orthodoxy “as sometimes happened to certain western religious figures.”