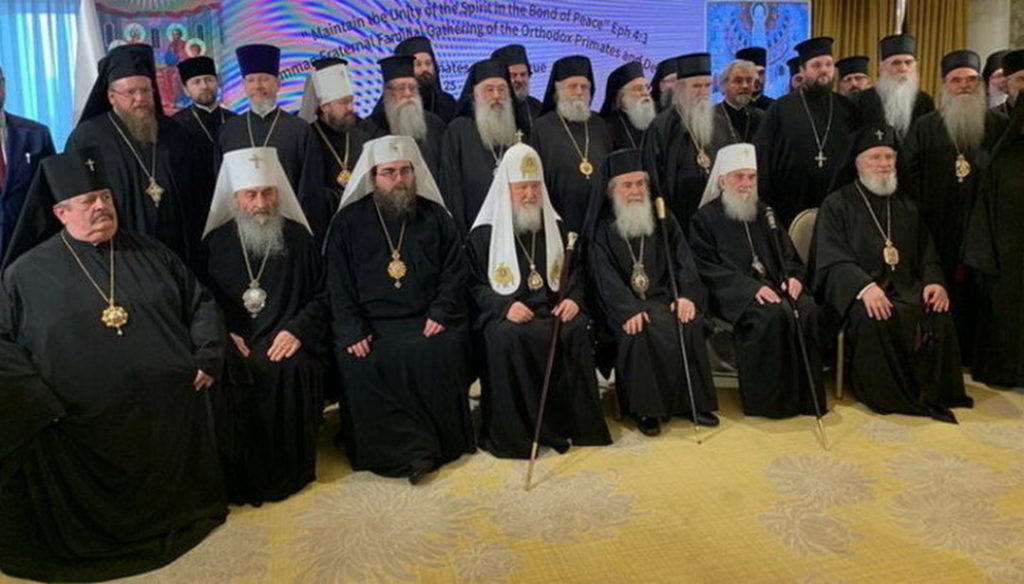 The Russian Orthodox Church suffered defeat at a Pan-Orthodox meeting in Amman, which was attended only by representatives of the Churches that depend on Moscow.

Patriarch Theophilus III of Jerusalem convened the meeting after his visit to Moscow. This means that the Moscow Patriarchate does not dare to initiate pan-Orthodox meetings on its own, journalist Vitaly Pornikov wrote in his column for Grani.ru, reports Obozrevatel.

“The Pan-Orthodox conference convened by Patriarch Theophilus III of Jerusalem after his visit to Moscow ended in a virtual failure. At the invitation of the Patriarch of Jerusalem, in addition to the Patriarch of Moscow, the real initiator of the meeting in Amman, only the Primates of the Polish and Czech Churches that are dependent on the ROC (and in the years of Soviet rule – from the KGB) have responded since the establishment of “friendly regimes” in socialist countries, and the Serbian Patriarch, who used the meeting to support the property rights of his Church in neighboring Montenegro,” the journalist said.

The communique of the Assembly states that the decision of granting autocephaly should be approved “in the spirit of a Pan-Orthodox dialogue given the common consent”. Portnikov reminded that the head of the Russian Orthodox Church tried to impose the same thesis on the pan-Orthodox Council in Crete, but the proposal did not receive the approval of the majority of Orthodox Churches in the world. Patriarch Kirill himself did not even appear at the Council at that Time.

“Even in Amman, Metropolitan Hilarion told reporters about the agreement in principle, which was “not ratified” in Crete. The Metropolitan did not explain why Patriarch Kirill did not go to the Council to ratify his own proposal,” the journalist said.

But, according to Portnikov, there is an explanation for this. Patriarch Kirill believed that Moscow is the third Rome, and continues to believe, despite the defeat in Amman.

“We could see that this is not the case, at least because the Moscow Patriarchate does not dare to initiate Pan-Orthodox meetings itself and therefore has to resort to the services of the Patriarch of Jerusalem. At the invitation of the Patriarch of Jerusalem, no one responded except those who simply cannot refuse Moscow. So there was a hitch – the Patriarch of Antioch, which is located in Syria and depends on Moscow more than the Polish and Czech metropolitans, could not be moved. In addition, even at this “meeting of allies”, Onufriy, the former Metropolitan of Kyiv, who leads the UOC of the Moscow Patriarchate, had to be included in the ROC delegation as an ordinary member of the delegation, disavowing Putin’s recent explanations about the “independence” of the Ukrainian Church,” the journalist explained.

Therefore, Portnikov concluded, there is no third Rome and never was. “There is a Church that is trying to provoke a split in world Orthodoxy and has found itself in virtual isolation in its struggle with the Ecumenical Patriarch. Because even those clients of this Church who cannot refuse anything to it and imitate the pan-Orthodox conference in Amman, do not risk going against the Ecumenical Patriarchate and even organizing a concelebration in the Jordanian capital. This is because the Christian Church is older than the third Rome, older than Cyril and Putin, and it is not the first or twenty-first generation of ambitious politicians who believe in their cardboard greatness. The Ecumenical Patriarchate is a reminder of this loyalty to tradition. And the Moscow Patriarchate is a reminder of what a moral catastrophe happens when the Church satisfies the wishes of the authorities,” the journalist said, adding that only in this sense can Moscow resemble the third Rome.