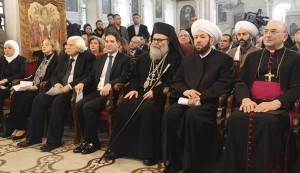 The Russians are elevating their rhetoric in Lebanon, exactly like a czar. A Russian parliamentary delegation visited Syria and then stopped in Lebanon upon the invitation of the Orthodox Gathering. The slogans used by members of the delegation are inspired by the sayings of Jesus: “Truth is on our side, and we will be victorious.” Maybe this is where the elevated tone is coming from. They are seeking to form a unified front so that the Christian Orthodox voice will be also unified during international events.

The delegation met with Syrian President Bashar al-Assad, and its discussion with him touched on all subjects. Sources from the delegation confirmed to As-Safir that there is a Russian attempt to secure the release of the two kidnapped bishops, as well as the nuns of Maaloula. The sources said, “There is no news about the two bishops, but the nuns are fine.” They refused to go into details about “a humanitarian issue that might risk the lives of some people if details were disseminated.” What is certain, however, is that “any news will be discussed in the Kremlin between President Vladimir Putin and Patriarch John X Yazigi of Antioch during the latter’s upcoming visit to Russia.” The Syrian president stressed to the delegation his “complete readiness for cooperation and openness,” as reported by the same sources.

There was an intimate meeting brokered by the secretary of the Orthodox Gathering, Samir Nuaimi. It took place between the delegation and Orthodox figures, mainly former Deputy Speaker of parliament Elie Ferzli, in addition to representatives of Orthodox associations in Lebanon. Russian Ambassador to Beirut Alexander Zasypkin delivered a speech in both languages, as he is familiar with the language of the country and its politics. The spiritual and existential expressions used by the Russians in their speeches were striking. When they address the Orthodox Lebanese, they say “our brothers in faith.” Despite the edginess that characterized the speech of Sergey Gavrilov, head of the delegation and chairman of the Duma’s Property Committee, he introduced the members of the delegation who represent all Russian parties.

In Syria, the delegation identified with its own country. In Russia, the role of the church complements that of the Russian leader, and in Damascus delegation members met with both political and religious figures. They met with President Assad, the speaker of parliament, Patriarch John X Yazigi of Antioch and the Grand Mufti of Syria Ahmad Badr al-Din Hassoun. The delegation also visited a number of hospitals. As for the purpose behind the visit, Gavrilov said, “Russia will do everything in its power to protect Christians in Lebanon and Syria.”

The only message conveyed to Syria through its political and religious figures revolved around “working toward establishing peace in Syria and helping this country on all levels.” The Russian leader is aware that the fall of Syria woul means that there would be “genocides, terrorism and displacement to Lebanon.” The leader voiced this through his spokesmen. Gavrilov valued the efforts exerted to unify Christians, saying, “We cannot ask from Maronites, Shiites and Sunnis to protect the interests of Christians on all levels. This is the task of all Lebanese authorities.”

The Russian official called on “forming a cooperative council to work on activating cooperation on all levels.” He added, “Lebanon differs from Syria. We cannot solve the problems of Christians by force, using Russian fleets.”

The former secretary-general of the Orthodox Gathering, former MP Marwan Abu Fadel, praised the humanitarian mission of the Russian delegation in Syria and the fact that the “Russian state and its society is the only one to couple words with acts through providing the Syrian people — who are in distress and under the thumb of growing terrorism — with in-kind aid, knowing that terrorism is threatening the stability of Lebanon.” Abu Fadel expressed his hope that the Geneva II conference will find a solution to the Syrian crisis through joining genuine international and regional efforts to stop the displacement, destruction and the violation of holy sites. Abu Fadel values the role of Russian diplomacy and all its figures to surmount the difficulties that stood in the way of this tough journey.