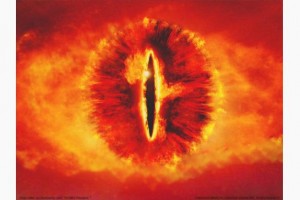 The Moscow group had expected to create something like this, the Eye of Sauron as depicted in the Lord of the Rings movies, atop a skyscraper.

A church spokesman told Moscow radio a project to place the Lord of the Rings’ flaming eye atop a skyscraper would symbolize the “triumph of evil … rising up over the city.”

MOSCOW— Russian fans of the writer J. R. R. Tolkien were disappointed Wednesday after a local art group abandoned plans to install a flaming eye from his The Lord of the Rings series atop a Moscow skyscraper.

The group, Svechenie, said it would not re-create the evil Eye of Sauron, after the Russian Orthodox Church complained the installation would invite mysterious dangers on the capital.

“We didn’t expect that our fan initiative, which received lots of attention from the media and millions of John R. R. Tolkien fans, would provoke such a reaction from society,” the group said in a Facebook post on Wednesday.

The planned project — for a metre-high orb perched atop a 21-storey building in Moscow’s business district — “does not have any religious or political subtext,” the statement added.

It was slated to be unveiled on Thursday to mark the Russian premiere of the film The Hobbit: The Battle of the Five Armies, based on another Tolkien novel in which the eye appears.

But Vsevolod Chaplin, the controversial spokesman for the powerful Russian Orthodox Church, felt otherwise. He told a Moscow radio station on Tuesday that the installation would be a “symbol of the triumph of evil … rising up over the city.”

“Is that good or bad? I’m afraid it’s more likely bad,” he said. “You shouldn’t be surprised later if something goes wrong with the city.”

It’s not first time the church, a key pillar of Putin’s drive to promote conservative values, has waded into the world of art and culture.

Religious officials and Orthodox activists have rebuked and even disrupted a range of exhibitions and performances they believe betray church values and destroy Russia’s moral fibre.

Most prominent was their campaign against feminist punk group Pussy Riot, three of whose members were jailed in 2012 after a shock performance in Moscow’s largest cathedral.

The wave of state-sponsored conservatism is so strong that many critics see it as evidence of a further fusion of church and state in Russia.

Fans of Svechenie’s Facebook page on Wednesday commented on the group’s announcement scrapping the Eye of Sauron with a mix of sardonic humor and veiled despair.

“But in the Stone Age our people are living in, you’re like Giordano Bruno!” he said, referring to the celebrated Italian astrologer murdered during the Roman inquisition for his alleged heresy.