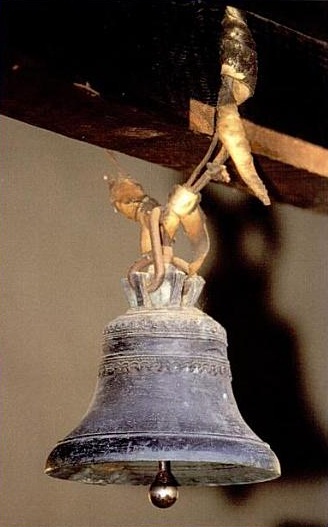 KODIAK, Alaska—A 200-year-old Russian Orthodox bell has been returned to Alaska after being held by Catholics for more than a century in Southern California.

The bell, known as the San Fernando bell, was returned to Holy Resurrection Orthodox Cathedral on Oct. 1 and is waiting to be placed in a permanent outside display.

Rev. Innocent Dresdow, dean of Holy Resurrection Orthodox Cathedral, said repatriation of the bell is significant since bells are considered joyful and a sign of hope in the Orthodox Church.

“This is very, very important,” he said. “The significance of bells in the church, they are a call to worship. They are a physical part of the church service itself.”

The San Fernando bell had been housed at the Mission of San Fernando Rey de España in California and was under the care of the Archdiocese of Los Angeles. How or when the bell came to be at the mission is unknown. The earliest recorded account of the bell in California is the writings of expert Marie Walsh in the 1930s, although some accounts indicate the bell could have been in California as early as 1890.

The bell is 12 inches tall, and its base is 12 inches in diameter. Made of a bronze alloy, it has two rings of lacework on the topside, but no other decorations, aside from a now-welded crack that stretches from one of the lacework rings to three-quarters of the way up the bell.

According to bell expert Mark Galperin of San Rafael, Calif., the bell was cast in the early 19th century or earlier and is of Russian origin. While the bell doesn’t have any inscriptions mentioning Kodiak, a second bell at the Rancho Camulos Museum in Piru, Calif. has an inscription that references a Kodiak historical figure. The bells are believed to be part of a set.

“We haven’t dug up any full historical proof that this (San Fernando) bell was in Kodiak before,” Dresdow said. “There is a good chance that it was a companion bell to the other bell we’re seeking to be returned.”

The Orthodox Church hopes to also receive the second bell, the Camulos bell, which has an inscription that explains it was cast in Kodiak in January 1796. It reads, “by the blessing of Archimandrite Joaseph, during the sojourn of Alexander Baranov.”

The effort to return the San Fernando bell to Kodiak Island started in 1987. An attempt was made to loan the bell the Orthodox Alaskans for several months while they celebrated the Russian Orthodox millennial and the 200th anniversary of Russia’s first colony in Alaska.

Bernard Wilson, then chief of the Los Angeles International Airport Police Department, led the attempt and had a brief encounter with Pope John Paul II during a visit to California. The Pope approved the loan, but the bell was never brought to Alaska due to complications.

“We’re sorry it didn’t come to pass in the late 1980s,” said Clifford Argue, a retired Alaska Airlines employee who was involved in the first return attempt. “We got Archbishop Benjamin interested in it again several years ago. It was really the Roman Catholic priest Father Ray Bucko who moved things along by tying in with the Native community in the Catholic Church, as a gift back to the Native community of Alaska.”

Bucko organized the repatriation and collaborated with others to make it possible. The San Fernando bell’s transfer from native Catholics to native Orthodox took place on July 21 in Texas, at the annual meeting of the Tekakwitha Conference, a Catholic organization.

Alaska Airlines flew the bell to Kodiak free of charge on Oct. 1.

“The Orthodox Christians of Alaska, especially the many Native clergy and laity, are most grateful to our Roman Catholic Native American brothers through Archbishop Gomez, the tireless work of Fr. Bucko, and others, for the return of this piece of our religious and cultural history,” noted Archbishop Benjamin in a press release. “We now look forward to a positive response from the directors of Rancho Camulos for the return of the companion bell they have at their museum.”

Archbishop Benjamin will present the San Fernando Mission with a replica bell since it returned the original to Kodiak.

The official receiving of the San Fernando Bell by the Holy Resurrection Cathedral will take place in Anchorage on Oct. 19. Archbishop Benjamin and Rev. Innocent Dresdow will be on hand during the event. A formal blessing and installation will be held in Kodiak at a later date. Dresdow plans to search the church’s archives for references of sightings of the bell in Kodiak.