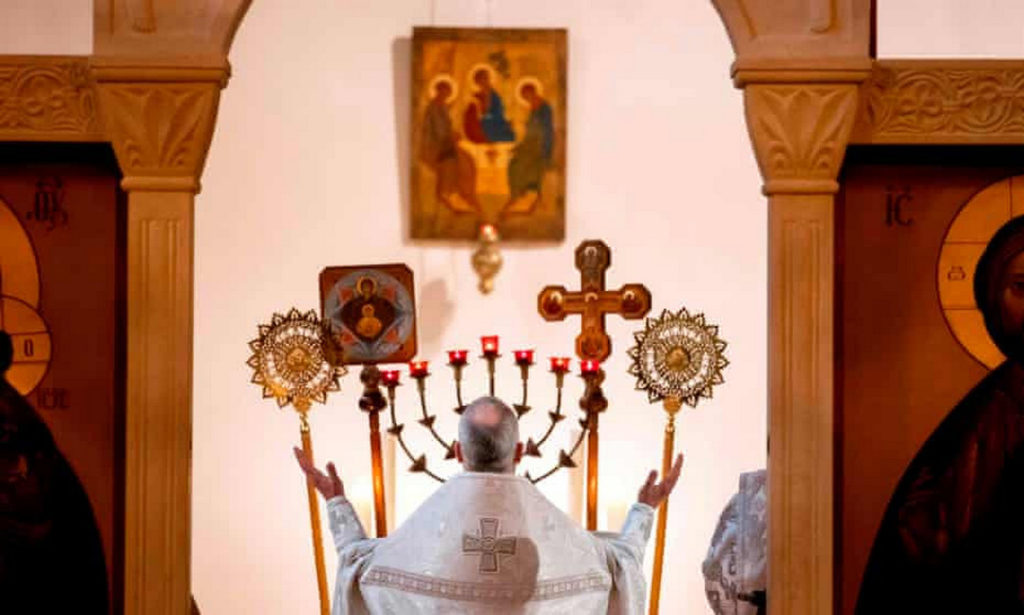 A Russian Orthodox church in Amsterdam in 2020. More than 280 Russian Orthodox priests and church officials from around the world have signed an open letter expressing their opposition to Russia’s invasion of Ukraine. Photograph: Koen van Weel/ANP/AFP/Getty Images

A Russian Orthodox church in Amsterdam has announced it is to split with the Moscow patriarchate, in the first known instance of a western-based church cutting ties over the invasion of Ukraine.

“The clergy unanimously announced that it is no longer possible for them to function within the Moscow patriarchate and provide a spiritually safe environment for our faithful,” the clergy said in a statement posted on its website. “This decision is extremely painful and difficult for all concerned.”

The head of the Russian Orthodox church, Patriarch Kirill, a trusted ally of Vladimir Putin, has declined to condemn the Kremlin’s decision to invade its neighbour, referring to Russia’s opponents in Ukraine as “evil forces”. In a Sunday sermon last week he also said gay pride parades organised in the west were part of the reason for the war in Ukraine.

The statement said the Russian Orthodox parish of Saint Nicholas of Myra had asked the Russian archbishop of the diocese of the Netherlands, who is based in The Hague, to grant the church “canonical dismissal”.

The clergy of the parish said they had requested to join the Ecumenical Patriarchate of Constantinople, the Istanbul-based Orthodox branch, seen as a rival to the Russian Orthodox church.

Kirill’s position on the war has led to unease among some Russian Orthodox priests who object to the invasion of a country often referred to as a “brotherly nation” in religious circles.

More than 280 Russian Orthodox priests and church officials from around the world signed an open letter expressing their opposition to Russia’s invasion of Ukraine. It said “eternal torment” awaited those who gave “murderous orders”.

The Russian Orthodox church in Amsterdam, which consists of four priests and a deacon – one of the biggest Russian Orthodox congregations in the Netherlands – has been critical of Russia’s role in the war since the start of the invasion on 24 February.

It said last week it would no longer mention the name of Patriarch Kirill in its liturgy because of his backing for the invasion of Ukraine. “We as the clergy of St Nicholas parish in Amsterdam have expressed our shock at the invasion of Ukraine by the armed forces of the Russian Federation … We distance ourselves from Patriarch Kirill’s narrative,” it wrote on its Facebook page.

The statement went against the official policy of the Russian Orthodox church not to use the word “war” and “invasion” to describe Russia’s actions in Ukraine.

The Russian priests in Amsterdam told the Dutch outlet ND that Archbishop Elisey of the Netherlands visited their church afterwards, warning that “Moscow was watching their actions closely”.

The Amsterdam church held a closed session on Sunday in which the head of the parish reiterated the decision to break with Moscow. “We asked our former Patriarch Kirill to stop the war. Unfortunately, this did not happen,” he said in a video address posted on the church’s YouTube page.

A Russian member of the church’s choir who was standing outside the church told the Guardian she supported the decision to separate from Moscow. “Once the war started, there was only one way out of this,” she said, asking not to give her name.

Russia’s invasion of Ukraine has also been criticised by other Christian religious leaders, including the head of Patriarchate of Constantinople, Bartholomew I of Constantinople, and Pope Francis, who on Sunday issued his toughest condemnation yet of the invasion, saying the “unacceptable armed aggression” must stop.

Bartholomew, considered to be the spiritual leader of the world’s Eastern Orthodox Christians, earlier said Putin had committed “a great injustice” by going to war against his “coreligionists” and had “earned the hatred of the whole world”.

In 2018 the Russian Orthodox church cut ties with the Patriarchate of Constantinople, seen as the spiritual authority of the world’s Orthodox Christians, after Bartholomew granted independence to the Ukrainian Orthodox church, which was previously under Moscow’s control.