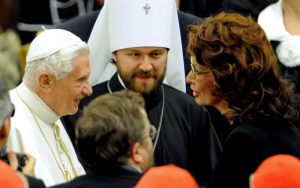 Catholics would agree with much of what Metropolitan Hilarion has said, but what can we actually do?

The speech given by Hilarion was certainly interesting, and revelatory of the thought of the Russian Church. He sees religion in most of Europe as in decline, about which he is undoubtedly right. One reason is increasing secularism in most countries outside Russia, and he characterises that this is a hugely negative phenomenon. There is much that Catholics will agree with here.

The Metropolitan also focuses on another factor that has led to a change in the religious landscape of Europe: large-scale immigration from outside Europe, and in particular from the Middle East and Africa. While he does not suggest that this migration should be halted or can be halted, here Metropolitan Hilarion finds himself in the opposite corner to the Pope, at least in the question of tone. For Hilarion, immigration is a challenge or even a threat, but for the Pope it is the opportunity to welcome the stranger. Indeed, more or less at the same time as Hilarion was speaking, Pope Francis was warning against the “temptation of exclusivism and cultural fortification.”

His strong words are clearly coming from a different perspective from Hilarion’s, and yet it would be a mistake to see these points of view as mutually exclusive. The truth is that Hilarion is right: if we admit large numbers of migrants from North Africa and the Middle East, then the character of Europe will change. The only question is how will it change, and whether this change will be a good or a bad thing. Again, there can be no dispute that Christians have a duty to welcome the stranger, as the Pope says, and that ethnocentrism is not the Christian way. But this does not answer the question of how we welcome the stranger, nor does it address the question whether the best way to help people and their countries is to let them enter Europe, rather than helping them at home.

Hilarion is raising a genuine concern, one that is deeply felt in Russia, which is host to numerous migrants from central Asia. The Pope is raising a theological concern, but one whose practical implications have not been worked out.

Metropolitan Hilarion also makes some observations about the Russian Revolution a hundred years ago, and rightly points out the way this damaged Russian society. His words serve as a useful rebuke to all those who have glamourised or continue to glamourise the Soviet Union.

“The historical catastrophe of 1917 embroiled Russia in a fratricidal civil war, terror, exile of the nation’s best representatives beyond the confines of their homeland, and the deliberate annihilation of whole layers of society – the nobility, the Cossacks, the clergy and affluent peasants. They were declared to be “enemies of the people,” and their relatives were subjected to discrimination and became the “disenfranchised,” which forced them to the edge of survival. All of this terror took place under the banner of a communist ideology that fought ferociously against religion. Millions of believers were subjected to the cruellest of persecution, harassment, discrimination and repression – from mockery and dismissal in the workplace to imprisonment and execution by firing squad.”

That is an eloquent statement of historical fact. But when it comes to finding historical parallels with the current situation in the West, the Metropolitan may be on less sure ground. Quoting Patriarch Kirill, Hilarion underlines the way the decline in faith among Russia’s pre-1917 elite, especially intellectuals, paved the way for the Revolution. He does not say it, but the same point is usually made about the French Revolution too. With this in mind, Hilarion then goes on to criticise the EU for its loss of the faith of its founding fathers (a useful point that is often ignored.)

“The modern-day decline of Christianity in the western world may be compared to the situation in the Russian Empire before 1917,” says Hilarion. This strikes me as dubious to say the least. Contemporary Europe has very little in common indeed with Tsarist Russia. And of course the thing that Hilarion does not mention at all is that the Church in Russia was, before the Revolution, closely aligned with the state, and indeed run by a government minister. This lack of independence may well have compromised the Church in the eyes of Russian liberals, who saw the Church as just another instrument of state oppression.

What can be done in the face of the decline of Christianity in Europe? The Metropolitan’s conclusion is as follows:

“In a situation where we have aggressive pressure of the groups which propagate ideas unacceptable from the perspective of traditional Christian morality, it is essential to unite the Churches’ efforts in opposing these processes, to act jointly in the media, in the sphere of legal support, as well as in propagating common Christian values at all possible levels. It is important that the Churches share their experience in this sphere, and develop cooperation between church human rights organizations and monitoring centres.”

That sort of conclusion resembles what Catholics have been saying for years, and is very welcome, though how this will work out in practice is unclear, given the fact that the Russian Church seemingly never challenges the Russian government, which is guilty of numerous human rights abuses.

Metropolitan Hilarion’s speech is certainly interesting, and in many ways challenging. On many topics, he hits the nail on the head, but in practical terms, where do we go from here? An honest discussion about Ukraine would be a good place to start.