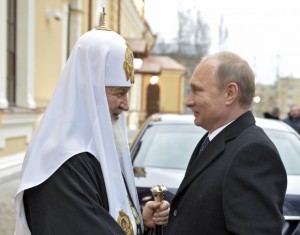 by Miko Morelos and Peter Kenny

The head of the Russian Orthodox Church has castigated the Greek-Catholic Church in Ukraine for being “divisive,” saying its stance puts at risk the improving of relations between Rome and Moscow.

Patriarch Kirill at the same time singled out the Vatican for what he said is a measured tone in the Russia-Ukraine crisis.

He pointed out that the Holy See had maintained its position on the resumption of peace talks instead of making “any lopsided assessments.”

“Today, fresh conflicts in Ukraine in light of the latest political events in the country are causing concern in our relations with the Roman Catholic Church,” the Patriarch was quoted as saying by the Interfax news agency.

Yet he said that starting with the very first protests in Kiev at the end of 2013, the Ukrainian Greek-Catholic Church supported one side, “which pushed for the overthrow of the authorities using nationalistic and often Russophobic slogans as its cover.”

Kirill said the leadership of the Ukrainian Greek-Catholic Church and most of its representatives “made extremely politicized statements, which did not help end the civil confrontation.”

The Ukrainian Greek-Catholic Church is in full communion with the Holy See in Rome.

A statement by the head of the Greek-Catholic Church as pro-Russian separatists battle Ukrainian troops for the control of eastern Ukraine may have triggered Kirill’s outburst.

The head of the Ukrainian Greek-Catholic Church called upon the faithful “to become guardian angels who day and night pray for the Ukrainian army,” Catholic World News reported on February 4.

“Let us pray for those affected and left without home, for the wounded and those in captivity, who die of hunger and cold,” said Major Archbishop Sviatoslav Shevchuk. “I urge all our Church to relentless prayer for Ukraine.”

Patriarch Kirill in his statement was quoted by  Interfax as saying, “Today, fresh conflicts in Ukraine in light of the latest political events in the country are causing concern in our relations with the Roman Catholic Church.”

Kirill lamented the Ukrainian church’s support for one side in the conflict between Kiev and Moscow over the Crimean peninsula saying they further fan division instead of working to put an end to the crisis.

Russia annexed Crimea during the 2013 revolt against a government in Kiev which had been seen as pro-Moscow and that would not allow Ukraine to foster closer ties with Europe.

The Moscow Patriarch praised the Vatican for pushing for sobriety in the Russia-Ukraine crisis, explaining its “satisfaction” over the Holy See’s position of “calling for peace talks and ending the armed clashes” between Crimea separatist and the military from Kiev.

The Russian patriarch pointed out that the Vatican’s stance on the issue showed that Rome joined Moscow in defending Christian values and other ills troubling both Orthodox and Catholic faiths.

Kirill assessed relations between the Orthodox Church and the Vatican.

He said it demonstrates “positive dynamics, primarily thanks to their clear understanding of the need for Orthodox and Catholic believers to act jointly in order to protect traditional Christian values and counter modern challenges such as secularism, discrimination of Christians, family crisis and the dilution of moral principles in private and social life.”

The Moscow Patriarchate has often criticized churches under the Ukrainian Orthodox patriarchate for purportedly spreading anti-Russian sentiment by supporting protests in Kiev.

Archbishop Shevchuk has dismissed the claim, insisting that the Greek-Catholic Church seeks reconciliation between Moscow and Kiev. At the same time, the Ukrainian church sought to dissuade Russians believing the “propaganda” of their government.

Two factors which influence the debate are the perception of the Moscow Patriarch having a close relationship with Russian President Vladimir Putin and also a history of stiff repression against the Ukrainian Greek-Catholic Church during the Soviet era.