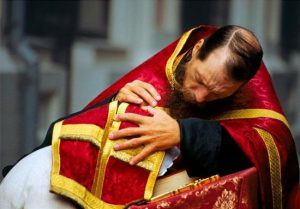 Moscow – Thousands of women in Ukraine, Russia and Belarus have taken to social media to share their experiences of sexual violence in an online flash mob under the hashtags #янебоюсьсказати and #янебоюсьсказать (I am not afraid to speak) started by Ukrainian social activist Anastasia Melnichenko.

Russia has responded, with the Russian Orthodox Church at the forefront.

Archpriest Dmitry Roschin, head of the synodal department for church governance with the public and the media, advised women participating in the online flash mob to turn to priests instead of posting their stories on Facebook. According to Roschin, the sexual harassment narratives these women share on social media could be then used against them.

“The church provides a worldview that has answers to all questions of human life,” Roschin was quoted saying by news website paperpaper.ru on Thursday. “That being said, the right to participate in the movement still belongs to everyone.”

Hieromonk Makary, host of the online project “Questions for a Priest,” believes that there is certain information, particularly stories of sexual violence, which should not be divulged to the general public, but to psychologists, police or priests.

Makary said that some female activists suffer from “exhibitionism— particularly with sexual, social and other roots.” He added that these flash mobs qualify as exhibitionism and should not be disclosed to the public, RIA Novosti reported.

“[Facebook administrators] sent me a notification yesterday, saying that I’d supposedly posted something that doesn’t comply with Facebook’s rules. And then it turned out that my account had been suspended temporarily, to check to make sure it’s not fake,” Melnichenko said, the Meduza news website reported.

Melnichenko suspects that this was probably due to a barrage of coordinated complaints about her account made by Facebook users, according to the news source. “It’s clear that this is connected to the flash mob,” she told Meduza. “It’s just that Facebook is my personal mass-media outlet. I use it to communicate with the world, and so I’m in a state of mild panic right now.”