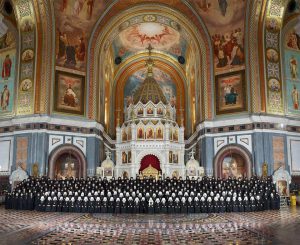 Moscow, July 15, Interfax – The Council which took place in Crete on June 20-25 cannot be regarded as pan-Orthodox, the Holy Synod of the Russian Orthodox Church said in Moscow on Friday.

“The Holy Synod determined that the Council, which took place in Crete, cannot be regarded as pan-Orthodox, and the documents it approved as expressing a pan-Orthodox consensus,” said the head of the Synodal Department for Church, Society and Media Relations Vladimir Legoyda, commenting on the results of a Synod meeting.

The meeting attendees acknowledged that the Council, which was attended by abbots and hierarchs from ten out of the 15 Orthodox Churches “was an important event in the history of the Orthodox Church council process,” Legoyda said.

At the same time, consensus has always been the underlying principle of the pan-Orthodox cooperation throughout this process, whereas conducting a Council in the absence of assent from a number of Orthodox Churches violates that principle, the Synod said.

It was decided that the documents, which were discussed by the Council in Crete, should be handed over to the Synodal Biblical and Theological Commission, which will study them and present its conclusions with the Synod.

Bulgarian, Antiochian, Georgian, Serbian and Russian Churches called for postponing the Council in order to settle the disagreements and finalize its draft documents. However, the Constantinople Patriarchate has rejected the initiative and insisted on it be held within the set timeframe. As a result, the Churches, who represent the minority of the episcopate, clergy and believers of the Orthodox world, participated in the forum.

If the Council in the current situation still goes ahead, “it will not be pan-Orthodox in nature and will have no authority,” head of the Moscow Patriarchate’s Department for External Church Relations Metropolitan Hilarion of Volokolamsk, toldInterfax-Religion at the time.

The attendees discussed six topics: the Orthodox Church’s relations with the rest of the Christian world, fasting, marriage, the church’s mission in modern world, ministering to the needs of Orthodox diaspora communities, and ways of proclaiming the autonomy of Orthodox Churches. They also approved a message.