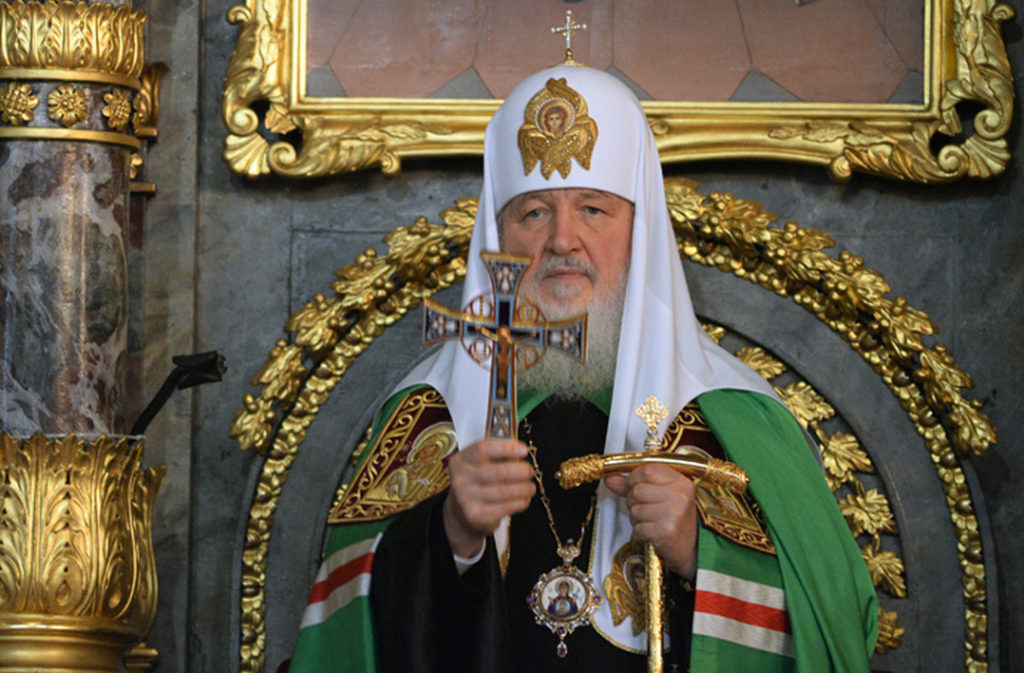 Patriarch Kirill of Moscow and All Russia during a ceremonial service at the Cathedral Church of St. Michael the Archangel in Belgrade. (RIA Novosti / Sergey Pyatakov)

He leads his flock from a soaring, gilded cathedral built to celebrate Russia’s victory over Napoleon, where week after week the powerful head of the Russian Orthodox Church is working to ensure that the faithful are all in on their country’s invasion of Ukraine.

Whether warning about the “external enemies” attempting to divide the “united people” of Russia and Ukraine, or very publicly blessing the generals leading soldiers in the field, Patriarch Kirill has become one of the war’s most prominent backers. His sermons echo, and in some cases even supply, the rhetoric that President Vladimir Putin has used to justify the assault on cities and civilians.

“Let this image inspire young soldiers who take the oath, who embark on the path of defending the fatherland,” Kirill intoned as he gave a gilded icon to Gen. Viktor Zolotov during a service at Moscow’s Christ the Savior Cathedral in mid-March. The precious gift, the general responded, would protect the troops in their battles against Ukrainian “Nazis.”

“Any war has to have guns and ideas,” said Cyril Hovorun, professor of ecclesiology, international relations and ecumenism at University College Stockholm. “In this war the Kremlin has provided the guns, and I believe the church is providing the ideas.”

In the process, Kirill has caused deep schisms in the global Orthodox Church, with priests in Ukraine, elsewhere in Europe and the United States condemning his support. Even dozens of lower-ranking clergy in Russia have broken with the 75-year-old patriarch, adding their signatures to an open letter decrying the invasion.

Orthodox priests in Ukraine have gone much further. In an open appeal last week, more than 320 of them accused the patriarch of preaching “heresy” and asked global church leaders to bring him before a tribunal to decide whether he should be deposed.

“Kirill committed moral crimes by blessing the war against Ukraine and fully supporting the aggressive actions of Russian troops on the Ukrainian territory,” they wrote. “It is impossible for us to remain in any form of canonical submission to the Patriarch of Moscow.”

The patriarch and his communications office did not respond to The Washington Post’s requests for comment.

The online petition called Kirill a leading author of “one of the ideological foundations of this war,” a doctrine known as “Russkiy mir,” or “Russian world.” The concept — a constant theme in the patriarch’s sermons — posits that the people of Russia, Ukraine and Belarus are one united civilization flowing from the 10th-century baptism of the Slavic tribes in Kyiv, which was then the center of lands known as Rus.

To some ears this dogma might sound peaceful and inclusive, but critics say Russia is using it to reassert dominance over territory it controlled during the Russian Empire and Soviet Union. Putin has embraced the doctrine in recent speeches, claiming that Ukraine has never really existed as a separate state and has historically belonged to lands led by Russia. Historians say that is flat-out wrong.

Signs of the church’s alignment with the state were on view at a service in northwest Moscow several days ago. Boxes decorated with Orthodox crosses requested donations for refugees from two regions of eastern Ukraine where Moscow has baselessly claimed that people are fleeing Ukrainian state oppression.

Not everyone there was buying the official church line.

“What is happening is a disaster for Russia and Ukraine,” said Olga, a 42-year-old therapist attending the service, who was too fearful to give her full name. “I realize that our silence is awful, but in fact many Russians are strongly against this war.”

She worries about the many repercussions: “Now we have to live with this for the rest of our lives, and probably even our grandchildren will be hated by Ukrainians. Because we are aggressors in the eyes of the whole world.”

The Orthodox Church was a dominant force in Russian life until the Bolshevik Revolution, when the Soviets heavily restricted the faith and purged many priests. A mini-revival of religion was allowed during World War II to inspire a “patriotic impulse” in society, explained Andrey Kordochkin, a Russian Orthodox priest in Madrid. But the state kept tight control.

Russia’s post-Soviet constitution restored religious freedom, sparking an upsurge in believers, with the share of adults identifying as Orthodox Christian rising from 31 percent to 72 percent between 1991 and 2008, according to the Pew Research Center. Only about 7 percent regularly attended church as of 2008, however.

The end of the Soviet period left an “ideological hole” in Russian society, a void that Hovorun said Kirill rushed to fill as he rose through the church ranks and became patriarch in 2009. He turned to the Russkiy mir doctrine, as did Putin five years later when he annexed Ukraine’s Crimean Peninsula. Kirill, an ally who once praised the early years of Putin’s rule as “a miracle of God,” did not speak out against the annexation.

His sermons since the war began in late February have repeatedly cast foreign enemies, not Russia, as the aggressors attempting to divide neighboring countries that he describes as “one people.”

“God forbid that the current political situation in fraternal Ukraine, which is close to us, should be aimed at ensuring that the evil forces that have always fought against the unity of Rus and the Russian Church gain the upper hand,” Kirill said days after Russia invaded.

Several days later, one of Kirill’s lieutenants circulated a letter asking churches to read a prayer beseeching God to “overthrow the plans” of “strangers speaking foreign tongues” who want to fight Russia.

On April 3, Kirill gave a sermon at a cathedral on the outskirts of Moscow built for the armed forces. Its metal steps are made from German weaponry melted down after World War II. Its mosaics depict battle scenes.

“Most of the countries of the world are now under the colossal influence of one force, which today, unfortunately, opposes the force of our people,” Kirill said, apparently referring to the United States. “All of our people today must wake up, wake up, understand that a special time has come, on which the historical fate of our people may depend.”

Some Russian priests have adopted similar or even harsher language in their sermons, while bishops have pressured clergy not to openly oppose the war, according to religious scholar Sergei Chapnin, a former editor of the Moscow Patriarchate publishing house and now a senior fellow at the Orthodox Christian Studies Center at Fordham University.

“Dozens of my friends in Russia, priests, they are saying, ‘We are trying to talk to our parishioners to say you cannot trust state propaganda.’ But this is private talks, not public, because of this pressure,” Chapnin said.

Still, some priests have spoken out, including one in the Russian city of Ryazan who was fired for his antiwar posts on social media. Another near the city of Kostroma was fined by authorities for his public dissent.

A backlash has also erupted in numerous parishes outside Russia that the Moscow patriarch oversees. One Russian Orthodox church in Amsterdam severed its ties last month and is seeking to join the branch of Orthodoxy based in Istanbul.

The head of the Orthodox Church in Lithuania, which is part of the Moscow Patriarchate, issued a bold statement against the war and said that Lithuanian believers would seek “greater church independence.”

“We strongly condemn Russia’s war against Ukraine and pray to God for its speedy end,” Metropolitan Innokenty of Vilna and Lithuania said in a statement. “As you have probably already noticed, Patriarch Kirill and I have different political views and perceptions of current events. His political statements about the war in Ukraine are his personal opinion.”

These ruptures are almost certain to grow if Kirill continues to defend the fighting. Many in the church will be listening for his words on April 24 as Orthodox Easter is celebrated.

Andriy Pinchuk, one of the Ukrainian priests calling for Kirill to be brought before a tribunal, hopes the patriarch will be stripped of his position. Even better, though not particularly feasible, Pinchuk allowed, would be for “Patriarch Kirill to be excommunicated from the church and anathema declared to him.”

David L. Stern in Ukraine and Mary Ilyushina in Latvia contributed to this report.