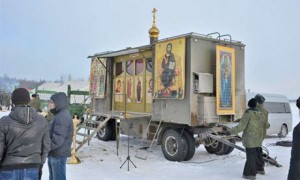 The Russian military unveiled an unlikely new weapon in its arsenal this month – an army of parachuting priests. The unit of chaplains, who have joined the Russian Airborne Force to train in parachute jumping and vehicle assembly, will operate out of flatpack churches that can be airlifted in to wherever soldiers may be stationed.

The church could be mistaken for a standard-issue army cabin, taking the form of a khaki-coloured shed on wheels, were it not for the cladding of gilded icons and the majestic onion dome spire sprouting from its rooftop. The mobile prayer room has also been fitted with a “life-sustaining module”, which includes a diesel power source, an air-conditioning unit and a fridge, reported Russia Today.

The chapel is flown in as a kit of parts, delivered via the kind of airborne platform usually used to carry armoured vehicles and other heavy military equipment, and is then assembled on the ground. Within, the gilded interior incorporates crucifixes, bells and icons, as well as a mini theatre – which can be extended sideways with additional wings, thus forming the cross-shaped plan of an Orthodox church.

The initiative has not gone without controversy in the Russian government, where debate rages over the cost of rearmament and rising military spending.

While the Russian army insists this is the first ever flying chapel in the world, Orthodox Christianity is not the first to bring mobile worship to the battlefield. The Israeli Defense Force launched a mobile synagogue initiative in 2011 to allow troops to pray more comfortably as they operate the Iron Dome anti-missile system in southern Israel. The UK Friends of the Association for the Wellbeing of Israel’s Soldiers (UKAWIS)has provided such mobile synagogues – which contain an ark, reader’s platform and washbasin – as “a source of spiritual sustenance [for the soldiers]as they carry the weight of Israel’s security on their shoulders”.

In the US, religious spaces have been mobile for some time, with organisations such as Transport for Christ spreading the gospel through the medium of the truck. Its mobile chapels, which are housed in articulated lorries clad in bright decals, are parked at “strategic truck stops” to “lead truck drivers as well as the trucking community to Jesus Christ”. They have yet to be deployed to the front line – as a lighter option, perhaps the US Army could try the inflatable church?