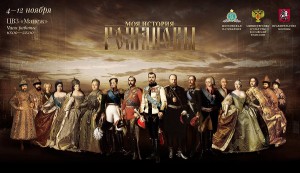 [Agence France-Presse] With a queue stretching at least a kilometre, a hi-tech exhibition giving a rosy view of the house of Romanov and jointly organised by the Russian Orthodox Church and the Kremlin has drawn tens of thousands of visitors in central Moscow.

In another sign of the power of the Russian Orthodox Church in post-Soviet Russia, it is a holy icon which has drawn the crowds as much as nostalgia for Russia’s ousted by the monarchy.

But historians say the authorities — who are fond of mixing both Soviet and Tsarist symbols to project Russian power — are clearly seeking to glorify aspects of the Romanovs in a bid to shore up their own legitimacy.

The queue of people waiting to see the exhibition, “Orthodox Russia: The Romanovs,” has stretched across Manezh Square close to the Kremlin walls.

The exhibition is organised to mark this year’s 400th anniversary of the founding of the Romanov dynasty. Its initiator was Archimandrite Tikhon, an influential monk often said to be President Vladimir Putin’s spiritual advisor.

Families with young children, pregnant women, retired people and school groups were among those braving chilly temperatures and rain to get into the vast Manezh exhibition centre.

So popular has the exhibition been that it is staying open every day until midnight to accommodate 17,000 visitors per day.

The organisers have twice extended the closing date of the exhibition, which was originally set to run for just a week.

It will now close on November 26 so that it can tour other Russian cities.

‘They seek legitimacy from the past’

The big draw is the icon known as Our Lady of St. Theodore, which was used to bless Michael I of Russia, the founder of the house of Romanov, on his accession in 1613 and is believed to protect families.

Many visitors bow in front of the icon and kiss it, according to Orthodox tradition. Now kept in a monastery in the town of Kostroma on the Volga, it is rarely shown to the public.

The free exhibition then takes visitors on a tour of Romanov history from the 17th century to the 1918 massacre of the last tsar’s family, using giant panels, touch-screens, documentary films and 3D reconstructions of battles — but very few original artefacts.

The organisers said they were trying to give a more objective view of the tsarist past to Russians who grew up with Soviet history books vilifying the Romanovs.

“We would like to show the history of Russia not in black and white, as we are in the habit of doing here, but in colour. The idea was to reestablish the facts, without commentary,” said Alexander Myasnikov, a former journalist who took part in the creating the exhibition.

Yet the exhibition’s depiction of history extols stability and strong authoritarian rule in Russia, while criticising opposition forces.

This vision of Russia closely echoes Putin’s message, and the authorities seem to be referencing the tsarist past to enhance their own legitimacy, said historian Vitaly Dymarsky.

“The current authorities are looking for something to base themselves upon. And since they can’t find anything that they can use as a base in our era, they are seeking it in the past.”

The authorities are ready to evoke both the tsarist and Stalinist eras to reinforce the message that the country needs strong rule, Dymarsky said.

Controversially, the exhibition describes the Decembrist armed uprising in 1825 in which young noblemen called for democratic reforms and were brutally put down by Tsar Nicholas I, as a “Masonic plot”.

The exhibition concludes with an extract from a Putin speech this September saying: “Too often in the nation’s history, we encounter instead of opposition to the authorities, opposition to Russia itself. And we know how that has ended: with the destruction of the state as such.”

Organiser Myasnikov acknowledged that the exhibition could be seen as commenting on today’s Russia.

“History is interesting in that one can always find there a response to current questions. It is full of allusions, associations and repetitions.”

Russia’s Culture Minister Vladimir Medinsky appeared to confirm the essentially didactic aim of the exhibition, saying that history is not just a chronicle “but has lessons for the present”.

He said the exhibition should be seen by all aspiring politicians “especially those who call for meetings with the aim of changing everything,” referring to Russia’s anti-Kremlin opposition, RIA Novosti reported.