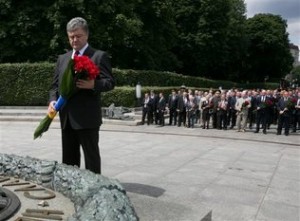 MOSCOW Russian President Vladimir Putin publicly expressed support Sunday for Ukraine’s declaration of a cease-fire in its battle against pro-Russian separatists and called on both sides to negotiate a compromise.

Putin said such a compromise must guarantee the rights of the Russian-speaking residents of eastern Ukraine, who must feel like they are “an integral part” of their own country. Putin’s statement appeared to signal that he sees their future in Ukraine.

Separatists in the eastern Donetsk and Luhansk regions have declared independence and asked to join Russia. Moscow has rebuffed their appeals, but is seen by Ukraine and the West as actively supporting the insurgency. Putin’s conciliatory words came as Russia began large-scale military exercises and after NATO accused Russia of moving troops back toward the Ukrainian border.

Putin appears determined to keep up the pressure to force the Kiev government to give the eastern industrial regions more powers and to prevent Ukraine from moving too close to the European Union or NATO. But he also wants to avoid more punishing sanctions from the U.S. and particularly from the European Union, whose leaders will meet Friday in Brussels, and therefore needs to be seen as cooperating with efforts to de-escalate the conflict.

The Kremlin initially dismissed the peace plan that Ukrainian President Petro Poroshenko laid out on Friday. But in a statement issued late Saturday, Putin said he welcomed the cease-fire and Poroshenko’s “intention to take other concrete steps to reach a peaceful settlement.”

As part of his plan, Poroshenko suggested a decentralization of power to give the regions more political authority. He also proposed new local and parliamentary elections, and measures to protect the language rights of Russian speakers in the east.

Putin was more specific on Sunday, when he spoke publicly following ceremonies commemorating the Nazi invasion of the Soviet Union on June 22, 1941.

“That President Poroshenko announced a truce is without a doubt an important part of a final settlement, without which no agreement can be reached, and there is no doubt that Russia will support this intention, but in the end the most important thing is a political process,” Putin said.

“After the Russian government too referred to the cease-fire in positive terms, the interlocutors emphasized the need for all sides to abide by it now and for a political dialogue to be put in motion,” Merkel’s office said in a statement. “Another topic of the conversation was the issue of securing the Ukrainian-Russian border.”

In Kiev, Poroshenko also addressed his nation on the day on which Ukrainians and Russians mourn the millions who died during World War II. He called for peace, but urged his compatriots to stand strong and united.

“It was so during the violent struggle against the Nazis and it should be the same now,” Poroshenko said. “Facing a real threat, we must unite even more and secure our historical choice, defend our right to live freely on our land.”

Also Sunday, a few hundred pro-Ukrainian activists marched outside Kiev Pechersk Lavra, a revered Orthodox monastery, which was guarded by riot police, some on horseback. The activists had come to prevent pro-Russian supporters from holding their own march at the monastery, which is under the jurisdiction of the Moscow patriarchy.

Putin has appealed to both sides to halt all military operations and sit down at the negotiating table.

It remained unclear whether the pro-Russia separatists would comply and how much pressure Russia would put on them to cease fire.

Putin said Sunday that fighting was continuing, including what he said was artillery fire from the Ukrainian side. Poroshenko has said his troops reserve the right to fire back if separatists attack them or civilians.

Poroshenko, in turn, told Biden that “Russian-backed separatists continued to attack Ukrainian forces, including with the use of artillery, following the cease-fire declaration,” Biden’s office said.

Biden reiterated that the U.S. was working with its G-7 partners to prepare further economic sanctions against Russia if Moscow failed to take actions “to stop the flow of arms and militants across the border and use its influence to publicly call on the separatists to lay down their arms.”

Tensions between Russia and Ukraine escalated sharply in February when protests in favor of closer Ukrainian ties with the European Union drove pro-Russia President Viktor Yanukovych from power. Russia denounced the events as a coup and annexed Ukraine’s mostly Russian-speaking Crimea region. Rebellion in the eastern regions broke out shortly afterward, with Ukraine accusing Russia of supporting it. Hundreds of people have been killed and tens of thousands have fled their homes.

Frank Jordans in Berlin contributed to this report.