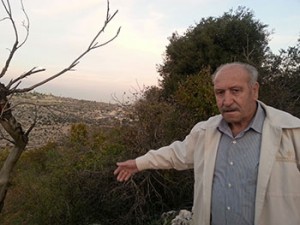 (Palestinian Christian Musa, a Greek Orthodox from Beit Jala, points to his land in the Cremisan Valley that is likely to be confiscated by the Israeli government for the construction of the Israeli separation wall in that area © Aid to the Church in Need)

Source: Aid to the Church in Need

Despite visit from the Pope: Christians in the Holy Land are not looking back on a good year

Musa is over seventy. Wistfully he looks out over the tranquil valley with its ancient olive trees. It is a place where fruit and a well-known wine are also grown. Over the course of his long life, the Orthodox Christian from Beit Jala near Bethlehem has seen much suffering in the Holy Land, wars, intifadas, flight and expulsion. However, nothing has touched him as deeply as the impending expropriation of his land. “Should the Israeli army get its way, they will be able to take away my land and build their wall on it. That makes me feel as though someone were piercing my heart. These olive trees have belonged to my family for many years. They support us. However, they are taking more away from us than just land and income: they are taking away our identity.”

In Beit Jala, a predominantly Christian town adjoining Bethlehem, 57 other Christian families are in the same situation as Musa. They are either directly or indirectly affected by the land confiscation: either because the barrier will be built on their land, or because it will become difficult or impossible to access their properties. The majority of Palestine’s approximately 45,000 Christians live in this area, which is part of the Christian triangle of Bethlehem, Beit Jala and Beit Sahour. Church towers and crosses shape the townscape here, not minarets. Two Catholic religious monastery and convent are also affected by the impending land confiscation. For months, a legal battle concerning the route of the barrier has been waged before the Supreme Court of Israel in Jerusalem – now in final appeal. The army says that the barrier between Israel and the Palestinian territories has to be built in this way and no other. Reasons of security rule out any other route. The Palestinians are sceptical. They believe that Israel is only interested in annexing as much land as possible to build settlements. A decision is expected in the near future. “We pray that an alternative route will be chosen that leaves the land to the religious communities and the families,” Bishop Shomali of the Latin Patriarchate said. He is responsible for the Palestinian territories. For weeks, the faithful have been gathering each Friday in the olive groves of the Cremisan Valley, which would be affected by the barrier, to celebrate Mass and pray. In addition, they have already written a letter to the Pope in Rome. “We still believe in justice and are hoping for the best,” Bishop Shomali said. “I ask the benefactors at Aid to the Church in Need and people of good faith to pray with us for the protection of our rights.”

Just a few kilometres further, on Manger Square before the Church of the Nativity in Bethlehem, the mood is not any better. The merchants who sell crosses, nativities and rosaries in the shops surrounding the square are all complaining. The customers have stopped coming after a year rife with violence in the Holy Land. “We were full of hope when the Pope visited us here in May. Afterwards, Israel’s President Peres, our President Abbas and the Pope in Rome met to pray for peace. But what happened then? Things became even worse than before,” George Azenian, an Armenian Orthodox Christian, said. He is a third-generation shopkeeper who sells devotional objects near the Church of the Nativity. “First came the Gaza War, then the violence in Jerusalem: the people are afraid and have stopped coming. We have suffered enormous losses as compared to last year. Not everyone can compensate. Hopefully, business will at least be good around the Christmas holidays.” During the past three months, nineteen Christian families, most of them Orthodox Christians, have left Bethlehem for the West. They no longer see a future for themselves and their children in the city of David and the birth place of Our Lord.

A growing number of Christians are also migrating from Gaza. Over the past ten years, half of what was once a population of 2,500 Christians has left. Today, only about 1,300 Christians are still among the over 1.8 million people living on the strip of land along the Mediterranean Sea. Catholics are a minority of a minority. There are just 170 of them. “The war this summer hit our church hard,” said Archbishop Alexios, the head of the Greek Orthodox Church, to which the majority of Christians in Gaza belong. In fact, one Christian woman was killed during the bombing raids, others were severely wounded. The Orthodox cemetery was hit together with buildings belonging to the Catholic and Orthodox church. “However, the help we gave Muslims who were made homeless by the Israeli bombing raids has improved our standing in society,” Alexios commented. However, the humanitarian situation in the area remains tense. Tens of thousands still do not have homes. The heavy rains of the past weeks have flooded the Gaza Strip. The United Nations has declared a state of emergency. Due to a lack of real prospects, five Christian families have already left the area since the summer; a number of them have gone to Belgium.

The Christians in Israel, in turn, have other worries than their brothers in the Palestinian territories. About 160,000 Christians, approximately eighty per cent of which are Arabs, are part of a total population of over eight million. However, the current debate about the character of Israel as a Jewish state – Netanyahu’s outgoing government wants to enact a law that would define Israel as such – threatens to alienate the Arab population even further from Israel. “This will strengthen their conviction that they are not wanted here,” the highest-ranking Franciscan in the Holy Land, Custos Pierbattista Pizzaballa, explained to representatives of the Catholic charity Aid to the Church in Need.

It was not a good year for the Christians in the Holy Land. However, for Musa, the old man from Beit Jala, the worst may be yet to come. “If they take our land from us, it will be a very sad Christmas.”

Directly under the Holy See, Aid to the Church in Need supports the faithful wherever they are persecuted, oppressed or in pastoral need. ACN is a Catholic charity – helping to bring Christ to the world through prayer, information and action. The charity undertakes thousands of projects every year including providing transport for clergy and lay Church workers, construction of church buildings, funding for priests and nuns and help to train seminarians. Since the initiative’s launch in 1979, Aid to the Church in Need’s Child’s Bible – God Speaks to his Children has been translated into 162 languages and 48 million copies have been distributed all over the world. While ACN gives full permission for the media to freely make use of the charity’s press releases, please acknowledge ACN as the source of stories when using the material.

On Line donations can be made at www.aidtochurch.org