This editorial was first published in www.mignatiou.com (In English and in Greek) on October 17, 2015, the day before the ground breaking ceremony for Saint Nicholas Church at Ground Zero.  This year’s feast of Saint Nicholas coincides with a renewed effort to finish the semi-constructed Church: a new committee was just appointed by Archbishop Demetrios. I believe it falls upon all of us to assist in this historical task, leaving aside for the moment the search for those responsible for financial scandals. The time will come for them to be punished as the law provides; they are already sentenced in our conscience. 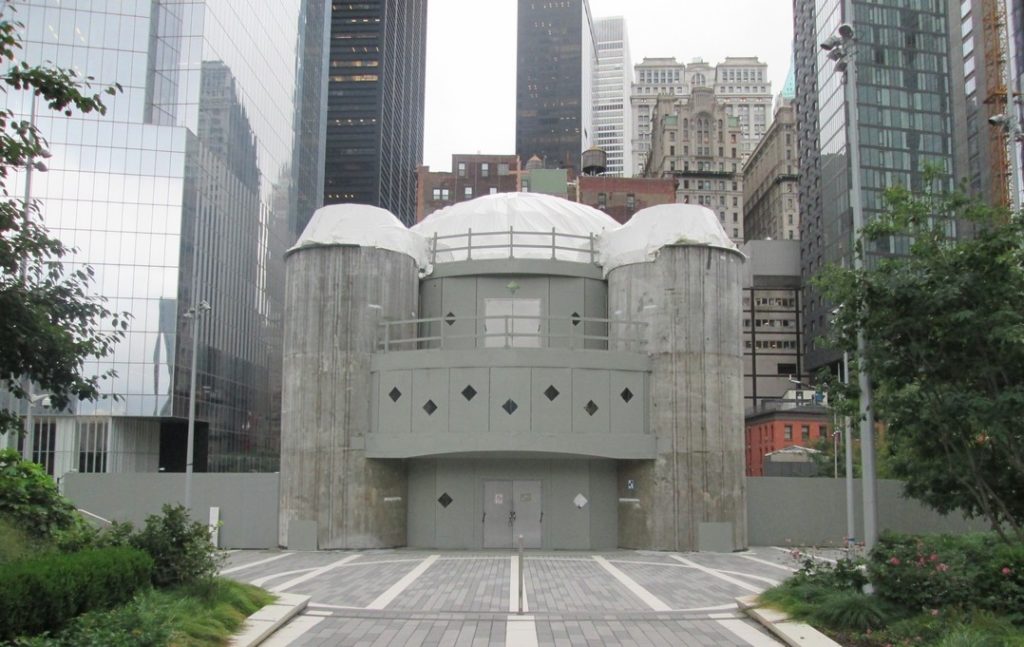 The future St. Nicholas Greek Orthodox Church at Liberty Park in New York City, seen in September 2018 from the west.

“An endless fountain of divine gifts”, as the Orthodox Hymn to Saint Nicholas poetically says, may the new Church and Shrine at the hollowed space of Ground Zero be.  The new Church, whose ground breaking ceremony takes place this Saturday, October 18, 2014, will be a place of remembrance and prayer for the relatives and friends of the thousands of souls lost on September 11, 2001, for all New Yorkers, all Americans and all people.  Let this Shrine be a place of personal recollection, an oasis amidst the busy streets of the World’s financial center.

Let it also be a place of humility, as the previous Church of Saint Nicholas had been for many decades; in its four floors it loomed taller than the 110-floor towers next door, and mysteriously managed to shade their immense presence with its spiritual light, instead of being overshadowed by them. Let this Shrine be a breakwater to human vanity and greed; let it spiritually guide its visitors to obtain “through humility, greatness; through poverty, riches”.

Let the Church of Saint Nicholas be what it always was, the guardian angel of Greek seamen and all seamen.  Even if these seamen now occupy luxurious offices a few blocks away, even if they are now preoccupied with the ups and downs of financial markets rather than sea gales… All Greeks deeply believe that a seaman without Saint Nicholas in his heart will find his ship smashed on rocky shores….

Finally, let the beautiful designs and ambitious plans, as well as the operation guidelines for the New Shrine, incorporate the principles emanating from the life of Saint Nicholas himself, a truly Ecumenical saint, as well as the teachings of Christianity: Love, Charity, Humility. Let the many benefactors from all over the Earth, who offer their donations for the building budget of the Shrine, kneel in front of the teachings of Saint Nicholas, whose image remained into the Ages as the personification of anonymity and the eternal example of selflessness.