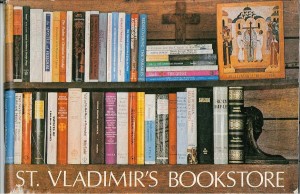 YONKERS, NY [SVOTS Communications] Saint Vladimir’s Orthodox Theological Seminary here has chosen as its theme for Orthodox Education Day 2014, “Do Books Still Matter? A Celebration of Orthodox Christian Publications.”  This year’s traditional open house will be held on Saturday, October 4, and will pay tribute to the importance of Orthodox Christian authors, illustrators, and publishing houses throughout the world.

The Dean of the seminary, Archpriest Dr. John Behr, author of academic, popular, and spiritual works, will be the keynote speaker. The seminary’s own publishing house, Saint Vladimir’s Seminary Press [SVS Press], will receive special recognition on reaching its 50th Anniversary and will invite many other Orthodox Christian publishers onto campus to help it mark the occasion.  The celebration of Divine Liturgy in Three Hierarchs Chapel will begin the day, with antiphonal choirs under the direction of Dr. David Drillock, the seminary’s Emeritus Professor of Liturgical Music and Editor of several SVS Press music books, and Heirodeacon Herman [Majkrzak], current lecturer in Liturgical Music and director of Chapel Music.

Invitations to Orthodox Christian presses and authors and illustrators and a schedule of the day’s events will be forthcoming on the seminary’s web site.