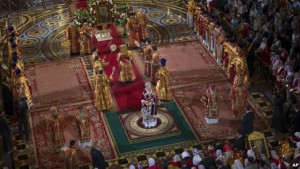 Many religions use music to help communicate their message. What you are listening to now is a choral workperformed in the Russian Orthodox Church. This kind of singing is different from the music of other religious traditions. And it is this kind of singing that a U.S.-based choir hopes to keep alive.

The choir is part of the Patriarch Tikhon Russian-American Music Institute. The group recently went to Russia for training in what is known as theSlavonic tradition of music.

All 35 members of this choir are Russian and citizens of the United States. The group sang during religious services in Moscow. The choir’s leadershipsaid they want to protect this musical tradition.

In North America, the Russian Orthodox Church has about 2,500 churches and monasteries, which are properties for religious workers.

Music is an important part of the Orthodox religious experience. The choir’swebsite states that Orthodox Christian worship in public “cannot take placewithout singing. In the Russian Orthodox Church,” it says, “a glorious traditionof church singing dates back at least a thousand years.”

The Patriarch Tikhon Russian-American Music Institute says it is interested inbuilding better relations between Russians and Americans at a time of tensionover Ukraine.

And they see music as a way of doing that.

Vladimir Gorbik is the head of the Patriarch Tikhon choir. He says his group isabout religion, not politics. But western media often note close ties betweenRussia’s Orthodox Church and the Russian government.

Alexei Malashenko is with the Carnegie Moscow Center. The center is part of the Carnegie Endowment for International Peace. Mr. Malashenko talks aboutthe connection between politics and religion in Russia. He says PresidentVladimir Putin uses the Orthodox Church to support his secular goals.

“Russian Orthodox Church is used by Putin, by president, as a tool formobilization of the population, of Orthodox population, in order to support whatpower, secular power, is doing now.”

Alex Lukianov is with the musical institute. He explains that in Russia, thegovernment and religion have always been connected, or as he says,intertwined. But he adds changes within the government have not kept upwith changes in the church.

“The government and the church have always been closely intertwined inRussia. The government‘s changed more so than the church has. You know, I think there are some things that have caused tension as a result of that.”

But it is not all politics for the church leadership in Russia.

Mr. Lukianov says the church in Russia is also doing a lot of good things,such as building and fixing churches and monasteries.

With the help of the Russians, the choir hopes to bring a group of RussianOrthodox Americans to Moscow every year to keep up the singing tradition.

We’d love to hear what you about think of this story. Share your thoughts in the Comments Section.
VOA’s Daniel Schearf reported on this story from Moscow. Anna Matteo adapted it for Learning English, adding some addition reporting. Kathleen Struck and George Grow were the editors.