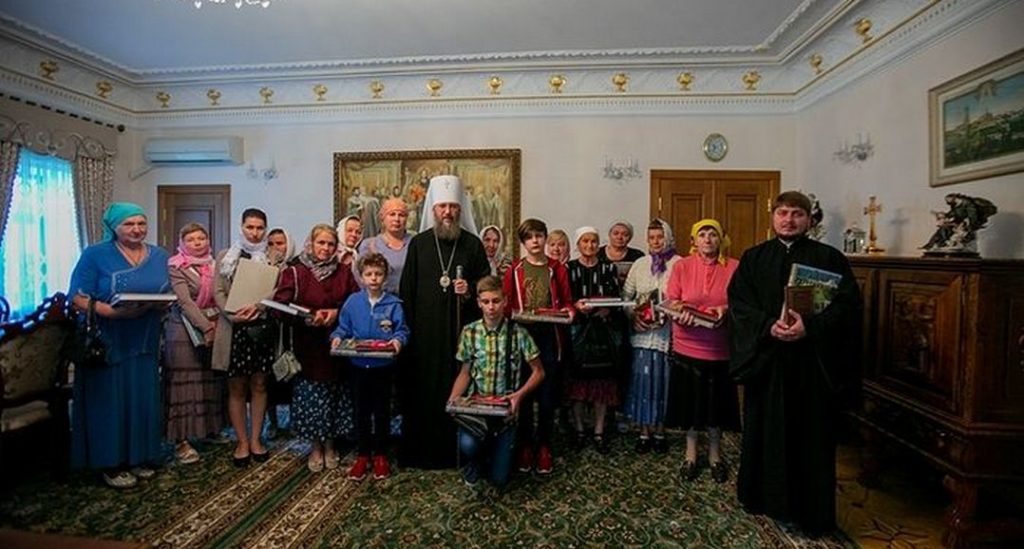 Metropolitan Anthony with Fr Nikolai Bregan and some members of the parish community.

Morozovka, Ukraine — At the recent celebrations in honor of His Beatitude Metropolitan Onuphry of Kiev and All Ukraine’s name’s day and the 5th anniversary of his enthronement as primate, hierarchs and representatives from around the Orthodox world proclaimed that they recognize precisely only the Ukrainian Church headed by him, that only it bears the grace of God.

Now, in the aftermath of this pan-Orthodox celebration in Kiev, another priest has made the same confession, resolving to return to the canonical Church from schism, together with his entire flock.

His Eminence Metropolitan Anthony of Boryspil and Bovary, the chancellor of the canonical UOC, met with Fr. Nikolai Brega and the parish community of Holy Dormition Church in the village of Morozovka yesterday, during which the priest, who had been suspended for going into schism, offered repentance and expressed his desire to return to the bosom of the canonical Orthodox Church.

This joyous news was reported by the Information-Education Department of the Ukrainian Orthodox Church, with a video of the meeting on Met. Anthony’s YouTube page.

“As the ruling hierarch of the Boryspil Diocese, I receive your repentance and we will pray that the Lord will unite that which was dissolved for a time,” Met. Anthony said. “I really hope, Fr. Nikolai, for your conscious position from now on and the position of your entire parish.”

Met. Anthony reminded that schism and heresy are sins against the Church, noting that there has been an attempt to substitute the Church for a political surrogate in Ukraine, and anyone who succumbs to this temptation has started “on the path of Judas.”

The Church is the mystical Body of Christ, and therefore it “should not deal with questions of political order. The Church is for the soul, for its salvation,” the Boryspil hierarch underlined. We know several historical examples when certain people replaced the Church with a political institution, “but it all ended in failure, including failure for those people who formed these organizations.”

“But it is terrible that people can trust those who wear priestly robes and thereby deceive themselves, but they don’t live in the Church. You probably felt this yourselves. Perhaps this is why the Lord brought you today with repentance. The Lord touched your hearts; he allowed you to feel that to go to some political structure is self-deception, and that God is not present there,” His Eminence explained.

He also wished the priest and his flock good strength in remaining true to the Church, with the help of God. “Just be faithful, no matter what the pressures and deceptions,” Met. Anthony encouraged.

Fr. Nikolai also explained that the decision to return was made by the entire parish. “Over the course of a month, we discussed that we had to return to the bosom of the canonical Church and remain far beyond any politics in the future,” he said.

Fr. Nikolai also explained that the parish had moved into the schismatic “Orthodox Church of Ukraine” due to outside pressure.

“But time shows the exact opposite, and where there is politics, there is no spiritual truth. Spiritual truth is where God and the Church are, where you feel grace and the Holy Spirit,” the priest emphasized.

“If we were subjected to oppression then, then today, thanks to and through this oppression, we have become much stronger. We have come to the Church and stayed, and now people who truly believe, people who truly want to remain in the bosom of the canonical Church, have the opportunity to commune… and with the spiritual sacred objects of our Church. We have expressed this today and shown it to the larger community by coming here, shown our repentance and desire to return again to the Church that raised and nourished all of us. This is the true reason that I can point to today,” Fr. Nikolai concluded.