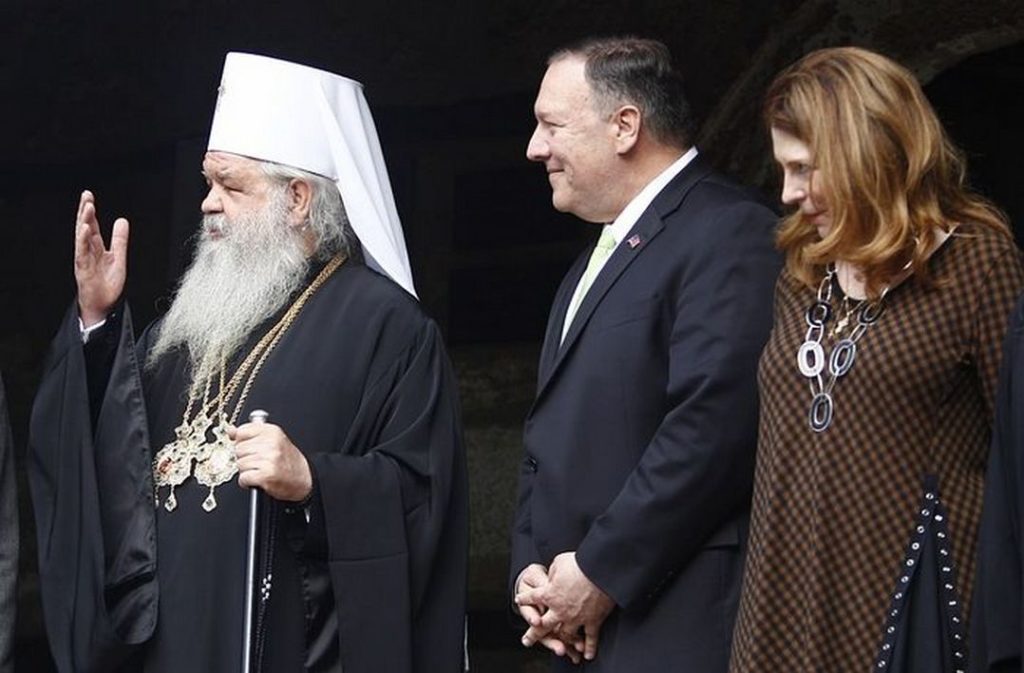 Ohrid, North Macedonia – The United States is committed to protecting the schismatic “Macedonian Orthodox Church” (MOC), as evidenced by the visit of U.S. Secretary of State Mike Pompeo, “Archbishop” Stefan of the MOC believes.

During a visit to North Macedonia on Friday, October 4, Pompeo, accompanied by his wife and the U.S. Ambassador to the country, visited “Abp.” Stefan of Ohrid and Macedonia, the primate of the schismatic MOC. The meeting took place in the 13th-century Church of the Most Holy Theotokos Perybleptos in Ohrid, reports Romfea.

The church was recently restored with $650,000 from the United States Agency for International Development (USAID).

According to “Abp.” Stefan, the visit of the Secretary of State testifies to the support and protection of the church and the cultural values of the country.

At the end of the meeting, the MOC primate gave Secretary Pompeo an icon of the Theotokos painted by monks of the Transfiguration Monastery in the village of Zrze. 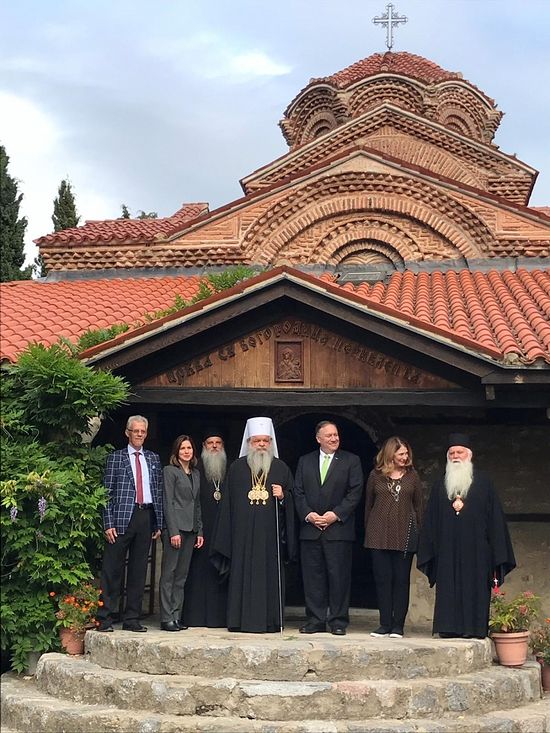 Pompeo and the U.S. government are no strangers to schismatic Orthodox groups. He and the Department of State have declared their support for the schismatic “Orthodox Church of Ukraine” (OCU) several times, and a high-ranking members of the OCU has openly acknowledged several times that Patriarch Bartholomew of Constantinople resolved to create the OCU, on the canonical territory of the Ukrainian Orthodox Church, precisely because he knew he had U.S. backing.

In July, “Archbishop” Evstraty Zorya, one of the top apologists for the schismatic and violent OCU attended a State Deparmtent conference on religious freedom.

Former U.S. Ambassador to Ukraine Geoffrey Pyatt was instrumental in organizing the 2014 Maidan revolution that further divided the country and Orthodox faithful and strengthened the resolve of the nationalist Russophobes who make up the schismatic OCU.

Pyatt is know the Ambassador to Greece and has been actively meeting with top Church officials as the Greek hierarchs continue their discussions about whether or not to recognize the OCU.

Pompeo himself was just in Athens as well, just days before the Bishops’ Council of the Greek Orthodox Church is scheduled to meet and deliberate on His Beatitude Archbishop Ieronymos’ recommendation on the Ukrainian issue.

Furthermore, there are ties between the U.S. government and a schismatic Russian church that is operating, among other places, in Cyprus, that has caused confusion and threatened to damage relations between the Russian and Cypriot states and Churches.

While “Abp.” Stefan believes Pompeo and the U.S. has North Macedonia’s interests at heart, it seems clear enough that the U.S.’s involvement with so many schismatic groups is for its own good, in the ongoing diplomatic conflicts with Russia. While in North Macedonia, Pompeo made sure to warn the people of Russian bots and trolls on social media. The MOC began its existence as a breakaway from the Serbian Orthodox Church, which has very good relations with the Russian Church and state and which rejects Constantinople’s autocephaly project in Ukraine.

The MOC also believes it will be the next to receive autocephaly from Constantinople, inspired by the example of the Ukrainian schismatics.