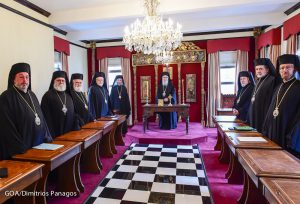 The Orthodox Christian Laity (OCL) supports the decision of Archbishop Demetrios and the Eparchial Synod of the Greek Orthodox Archdiocese of America to elevate Bishop Sevastianos to lead the Metropolis of Chicago as its new Metropolitan.  As Elaine Jaharis pointed out in her recent Open Letter published in The National Herald, the stakes for the Metropolis of Chicago, the Archdiocese and the Ecumenical Patriarchate could not be higher.

The Orthodox Christian Laity has supported the efforts of the Ecumenical Patriarchate where it believes that those efforts have merit: (a) The convening of pre-conciliar meetings over the years; (b) the decisions of all of the Mother Churches at Chambésy; (c) the convening of the Assembly of Bishops in America; (d) the convening of the Holy and Great Council held in Crete last year.

Much ink is being spilled in The National Herald both editorially and in commentaries by its Religion Writer, criticizing Archbishop Demetrios and seven of the eight members of the Eparchial Synod for their selection of Bishop Sevastianos to replace the late Metropolitan Iakovos.  A fair reading of The National Herald’s coverage is difficult, because it seems to be “all over the place.”  After all the ad hominem attacks against Church leaders, including the Patriarch, the position of The National Herald comes down to this: Those entrusted with leading the Church in America who followed all of the required procedures, including receiving input from the clergy and laity should not be allowed to explain their choice to the Patriarch.  By asking for a meeting, they are guilty of “entangling the situation against the Greek-American community”.  Suddenly, the request for a meeting is a “direct disobedience” of the Patriarch!

The path forward according to The National Herald is to remove the Archbishop and “clean house” in the Eparchial Synod, presumably because the Patriarch has the ultimate power to do whatever he chooses, and because he knows the needs of the Church in America better than those who have been selected and entrusted to lead this “vineyard that the Lord himself has planted here in America”.

The National Herald’s attempt to cast the current impasse over the selection of the next Metropolitan of Chicago as a matter of “disobedience” and an “affront” to the Patriarchate is without merit.  It is a “crisis” created by the Patriarchate and hyped by The National Herald for its own agenda, whatever that happens to be: sell more newspapers? …open more Greek Schools in NY? …replace Archbishop Demetrios and most, if not all of the Eparchial Synod? …and replace them with whom?