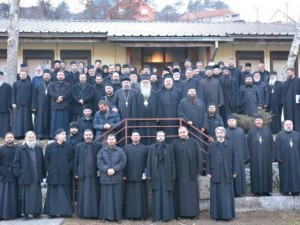 The Serbian Orthodox Church in Montenegro has urged the authorities to organize a referendum on NATO membership after Russian clerics and political leaders voiced their opposition.

by Dusica Tomovic – BIRN – Podgorica
The Serbian Orthodox Church in Montenegro said that it was its “pastoral and civic” duty to ask for a referendum on NATO membership – a call which echoed demands made by Russian politicians and clerics after the Western military alliance invited Podgorica to join last month.

“It is our duty in the name of the Church that gave birth to Montenegro… to say that it is necessary that such a historic decision, like the decision on independence, is made by all citizens in a free referendum, and not simply by pressure from the ruling clique,” it said in a statement.

The statement came after the Russian Orthodox Church expressed concern about the situation in Montenegro, where the country’s large Serbian community bitterly oppose membership of the Western military alliance.

The Serbian Orthodox Church, which wields great influence in the country, has repeatedly criticized the Montenegrin government for its plan to join NATO.

On the official website of the Montenegrin Metropolitanate, which is part of the Serbian Orthodox Church, an announcement has been posted for a new anti-NATO protest in Podgorica on January 13, where pro-Russian parties and organizations are also celebrating the ‘Serb New Year’, the traditional Orthodox beginning of the year according to the Julian calendar.

With support from Moscow, most of the opposition parties representing the large ethnic Serbian community say they will try to stop Montenegro becoming the 29th member of NATO without a referendum.

Mainly Slavic in ethnicity and Orthodox in religion, Montenegrins have a long history of close relations with Moscow, which anti-NATO activists use as an important argument against membership.

Meeting Serbian Interior Minister Nikola Selakovic in Moscow, Kirill said: “We worry about the events in Montenegro as we see that people are against the plan to join and that all the protests are being put down.”

Moscow has already described NATO’s invitation for Montenegro to join as confrontational, with the Russian foreign ministry claiming it would lead “to further fragmentation of the European security space”.

In December, Russia urged Montenegro to hold a referendum on joining NATO, arguing that less the half of its population backed joining the alliance.

The alleged potential for Russian interference in Montenegro was raised in October, when protesters and police clashed in Podgorica during demonstrations against the country’s veteran Prime Minister Milo Djukaonovic.

Although officials in Moscow denied Djukanovic’s allegations that they orchestrated the protests because many of the protesters were demonstrating over corruption and the state of the economy, speculation about Moscow’s role mounted when the leading Serbian bishop in Montenegro, Amfilohije, publicly lamented the country’s separation from “Mother Russia”.