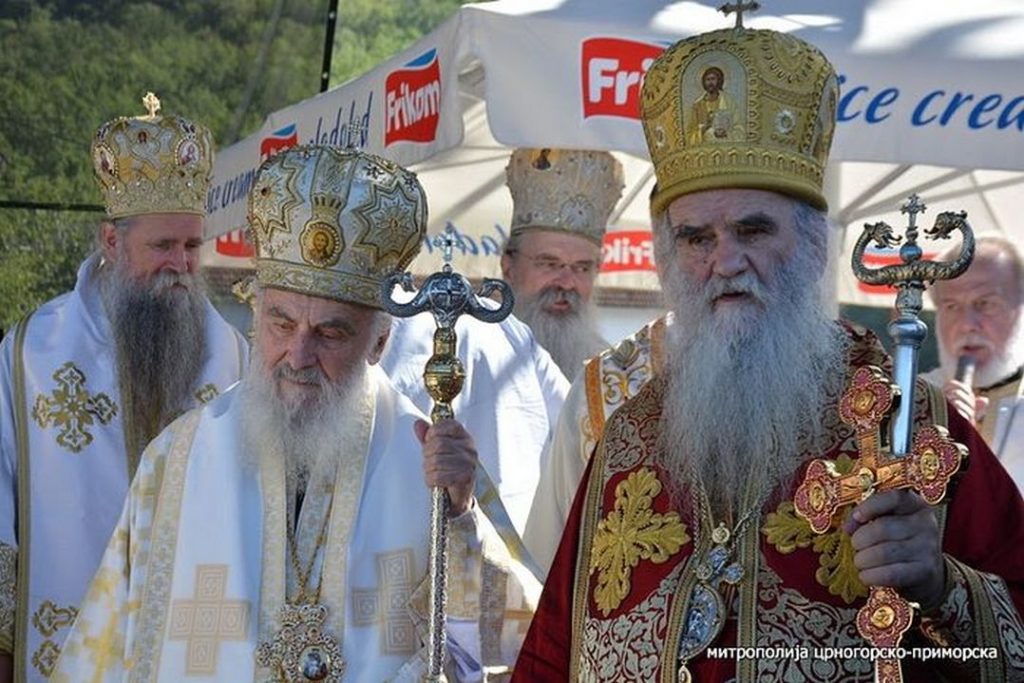 [Lastva Grbaljska, Montenegro] – The Serbian Orthodox Church is equal to the ancient Churches of Jerusalem, Antioch, and Constantinople and the rest, and the Church of Christ does not divide along ethnic lines, His Holiness Patriarch Irinej of Serbia and His Eminence Metropolitan Amfilohije of Montenegro said at recent celebrations at the Podlastva Monastery of the Nativity of the Mother of God in Montenegro.

Celebrating the 800th anniversary of the autocephaly of the Serbian Church and the 1,500th anniversary of the monastery on Saturday, September 28, His Holiness stated that “today is a great and blessed day. Eight centuries ago, our Church became autocephalous, equal to all the other great Orthodox Churches, beginning with Jerusalem, Antioch, and Constantinople,” reports the press service of the Serbian Church.

Unfortunately, many have forgotten these basic truths today, Pat. Irinej said. Those who come into power often seek to fulfill the old Roman rule of divide and conquer, the primate said. “Unfortunately, we have given into this temptation in our time, therefore we have allowed others to divide, quarrel, and separate us from one another, and today we are experiencing great temptations.”

“But since we have a spiritual basis, we also have the great grace of God, because today, when we are gathered here together, brothers and sisters, and many saints stand before the face of God, and they will not leave us,“ the Patriarch preached.

And reference St. Paul’s Epistle to the Galatians, Met. Amfilohije emphasized that in Christ and in the Church there is neither Greek nor Jew, slave nor free, men nor women, Chinese nor Americans, nor Serbs, nor Montenegrins, nor Croats, nor anybody else: “It is the Church of God, in which all are one and called to be together in time and in eternity.”

In this vein, Pat. Irinej stated in January that in the context of the ongoing Ukrainian ecclesiastical crisis, the Serbian Church does not stand with either the Russian or Constantinople Church, but with the holy canons, which govern the entire Church regardless of location, race, ethnicity, or any status.

In their 2019 Nativity epistle, the hierarchs of the Serbian Church noted that the rampant Russophobia in Ukraine is largely responsible for worsening the schism there.

The attitude of the Serbian Church stands in stark contrast to certain Greek-tradition hierarchs, including Patriarch Bartholomew, who has openly declared that the Greeks have a special place within Orthodoxy, and Metropolitan Chrysostomos of Dodoni, who declared that the Greek Church has to stand with the Patriarchate of Constantinople on the Ukrainian issue, not because it is right, but because it is Greek.