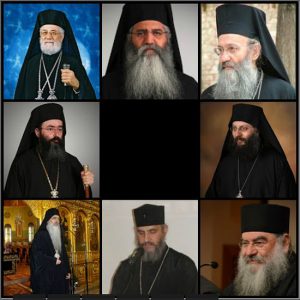 Greek media is reporting that at least two documents put forth by the recently concluded Pan-Orthodox Council on Crete were not signed by all delegates.

While the names of all delegate bishops from each of the ten represented Local Churches were added to each document by the Secretariat of the Holy and Great Council, there were those who abstained from signing the documents “The Sacrament of Marriage and its Impediments” and “Relations of the Orthodox Church with the Rest of the Christian World.”

It is reported that Met. Hierotheos (Vlachos) of Nafpatkos and Agios Vlasios, who had a lively debate at the Council with Met. John (Zizioulas) of Pergamon over the theology of personhood, withheld his signature from both documents.

Additionally, Metropolitans Athanasius of Limassol, Neophytos of Morphou, Nikolaos of Amathus, Epiphanios of Ledra, and Porphyrios of Neapolis of the Church of Cyprus, and Irinej of Bačka of the Serbian Orthodox Church withheld their signatures from the document “Relations of the Orthodox Church with the Rest of the Christian World.”

Unofficial information says that the number of Serbian bishops who refused is much higher.

The official site of the Morphou diocese has posted Met. Neophytos’ declaration addressed to the Council in which he refers to the “Relations of the Orthodox Church with the Rest of the Christian World” document as “dogmatically vague” and calls its fruit “diplomatic compromises.” He makes several references to the words of Sts. Paisios and Porphyrios, as well as of Elders Sophrony (Sakharov) and Iakovos (Tsalikis) and other contemporary ascetics, stressing that the document is at odds with their teachings and insufficiently clear about the fact that the Orthodox Church is the sole bearer of the fullness of truth.

While it was previously reported that eight Metropolitans in all chose not to sign the relations document, Metropolitan Vasileios of Constantia and Ammochostos has personally stated that he did indeed sign all conciliar documents.