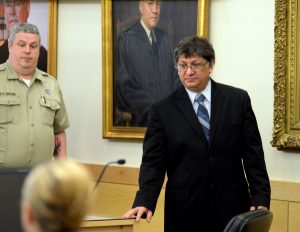 BANGOR, ME – Adam Metropoulos, a 53-year-old former Greek Orthodox Priest, who in March was convicted on four felony counts of sexual abuse of a minor, and in April was sentenced to 12 years in prison, is now being sued by the victim, the Bangor Daily News reported.

The name of the plaintiff, now 24, is not being released publicly because he was the victim of sexual abuse, the News reported. The lawsuit also names as co-defendants Metropoulos’ supervisors and the Greek-American community in Bangor, although it does not specifically name St. George Greek Orthodox Church, where Metropoulos served.

The victim claimed to have sustained severe and permanent physical injury, emotional distress, mental anguish and future and past medical expenses because of Metropoulos’ sexual abuse, which occurred in 2006 and 2007, and he claimed, the News reported, that the Boston Metropolis, its leader Metropolitan Methodios, the Greek Orthodox Archdiocese of America, and the Greek Orthodox community in Bangor were negligent in their supervision of Metropoulos.

The Boston Metropolis removed Metropoulos from his position the day following his arrest.

Metropoulos is incarcerated at the Maine Correctional center in Windham, the News reported, with 5 ½ years of his sentence suspended, resulting in 6 ½ years of jail time actually imposed.

The civil suit was filed on May 20 in Penobscot County Superior Court.