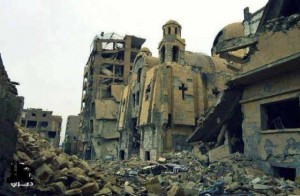 In the midst of the chaos and carnage, a church elects a new patriarch.

On Ascension Day, in the midst of presidential elections in Syria, I sat amongst a great host of bishops and dignitaries in the monastery church of the Syriac Orthodox Church in Maarat Saydnaya, about 30km from Damascus. It was my privilege to attend the enthronement of their new patriarch, Moran Mor Ignatius Aphrem II as Patriarch of Antioch and Supreme Head of the Universal Syriac Orthodox Church. This traditional title refers to the city where the Lord’s followers were first called Christians.

The ancient denomination, which dates back to the first century, worships in Aramaic, the language of our Lord Jesus. Amidst the formal liturgy, the resplendent red and gold robes, the tinkling of the Cherubim and Seraphim bells, and the sonorous chanting of the choirs, there was a reality and vibrancy, a hope and joy, which were almost tangible. Spontaneous cries of gruff acclamation from the men in the congregation mingled with the shrill ululation of the women, who were celebrating as if for a wedding.

The new Patriarch’s dearly beloved predecessor, the gentle and saintly Zakka I, had held the post for 33 years. For most of the crowd of 3,000, as for most of the Syriac Orthodox bishops themselves, let alone the many visitors representing the Vatican, the Church of England, and other denominations, the Grand Mufti of Syria and the various government officials, this was therefore a unique ceremony that they had never experienced before.

A central feature of the three-hour liturgy, which was first written down in 1172, was the Prayer of Invocation of the Holy Spirit by St Clement. The many clauses of this beautiful prayer were sung in a range of European languages, reflecting the scattered diaspora of the Syriac Orthodox people, who in the last decades have fled the marginalisation, discrimination and violence they face as Christians in the Middle East. Parts of the service were also sung in Malayalam, a language of South India, where the Syriac Orthodox are at their strongest numerically; they date their Christian heritage back to a visit of St Thomas the Apostle to India.

And who could need hope and joy more than Syrian Christians in 2014? Their country was formerly stable and secure, a place of refuge for Christians fleeing anti-Christian violence in other countries of the region, a place where Christians were respected as equals by the Muslim majority in a way that is probably unique in the 21st century. But since 2010 at least 160,000 people have been killed in the civil war and some 6 or 7 million people have left their homes and are either refugees in neighbouring countries or internally displaced within Syria. Amongst them are many Christians.

Islamist rebels focused their violence especially on the Christians, their church buildings and their church leaders. Where possible they have imposed sharia law locally. The inventive gruesomeness and cruelty of some of the killings seem deliberately designed to intimidate the Christian community. Lest there should be any doubt that Syria’s two million Christians are no longer wanted there, many have been offered a four-fold choice by the rebels: convert to Islam, pay the traditional Islamic jizya tax (a sign of non-Muslim submission as second-class citizens), leave, or be killed. It is small wonder that hundreds of thousands have left their homes. Leaving their jobs behind them, they soon use up their savings, and become effectively destitute.

Even the Christian village of Maarat Saydnaya, where the glorious celebration of the new Patriarch took place, was safe only because its men set up check-points and defended it. As with all Christian communities, it was a rebel target. Just ten miles away lies the ancient Christian village of Maaloula, famous for the fact that its people have continued to speak Aramaic as their mother-tongue. Last year the village was attacked by Islamist rebels, its churches and their holy items deliberately desecrated. People were killed, nuns kidnapped and virtually the whole population fled.

I asked many of the Syrian Christians how they saw the future. Hoping against hope, some clung to the idea that things could return to how they had been. “When we go back,” said one couple from Aleppo several times as they described the plans they had for returning home from Lebanon and getting on with their lives again one day in Syria’s largest city. Yet Aleppo, which vies with Damascus for the title of the longest continuously inhabited city in the world, has been virtually destroyed by rebel mortars, and hundreds of thousands of its people, including many Christians, are living under medieval-style siege conditions, desperately short of food, water, fuel and everything needed for daily life. Hospitals and doctors have been particularly targeted. Over the past three weeks, the Christian areas have been particularly heavily mortared, leading to increasing casualties. Out of a Christian population of over 400,000, there are now only about 150,000. Anyone who can escape has gone.

Today, Pentecost Sunday, the new Patriarch has celebrated the Eucharist in Homs. Homs’s old city has been one of the first and most sustained targets of the rebels, with nearly all the Christians forced to flee, bar those who were held as a human shield. In recent weeks, because of a treaty between the rebels and government forces, over 7,000 Christian families returned to Homs. Sadly, they have discovered that their homes have been looted and wrecked. They now find themselves homeless, penniless, and without any means of surviving. Each day the Archbishop of Homs is providing a midday meal for them in a destroyed church building.

Unless God intervenes with a miracle in answer to His people’s prayers, I do not think that Syria can ever return to how it was before the “Arab Spring”. When peace does eventually come, it can surely only be in the context of a new political settlement and the drawing of some new national boundaries. But where will the Christians be in this scenario? Although more numerous than the Druze, they are scattered across the country. There are concentrations of Christians in Aleppo, in Wadi al-Nasara (the Valley of the Christians) near Homs, in Hassake and Qamishli on the Turkish border, and in the capital Damascus. Christians will have to live as a minority within each of the emerging new political entities.

The conflict in Syria is not just a civil war with two sides pitted against each other. Rather, it has become a complex sectarian and inter-communal, ethnic and ideological war, where the battle lines are constantly changing. There are Kurds in the north, Al-Qaeda and Islamist rebels in the north and east, Syrian government forces in the centre, south and coastal regions, and even within these areas conflict reigns. Internationally, there is little sign of a peace settlement. Militarily, government forces have not only held their own but are now re-taking territory. Al-Qaeda and the Islamists continue to control their areas and the moderate forces backed by the West are unable to make any progress. Nearby Middle Eastern countries are also divided, with Saudi Arabia supporting the moderates, Qatar the Islamists, Turkey allowing all pro-rebel forces to cross its border into Syria, Iraq and Iran and Hizbullah in Lebanon supporting the Syrian government. A Shia-Sunni conflict that could lead to a regional war is increasingly a reality.

The celebration of the new Patriarch in the midst of both a national and a regional conflict was a sign of hope in that it spoke of the continued existence of the Church. As an Arab Christian doctor said to me last year, “When I look at the situation now I am filled with despair, but when I look back at history with the eyes of faith and see how God has kept His church despite the persecution, wars and violence, I have hope.”

Last Sunday the celebrations of the new Patriarch continued in Beirut and again the international Christian community were present, along with heads of all the Lebanese churches and many others. The Armenian Orthodox Patriarch affirmed the unity of the Church, the one-ness of the Body of Christ.

The installation of the new Syrian Orthodox Patriarch speaks of the continuity of the Church over two millennia. He is not only Syrian but also an American citizen, having lived for 18 years in New Jersey as Metropolitan of the Eastern United States.

Mar Aphrem II is a man of great wisdom and understanding, knowledgeable in the ways of the West and of the East, a great scholar of liturgical matters, with a deep humility and immense energy. I believe that God has indeed raised him up for such a time as this.

Patrick Sookhdeo PhD, DD is the international director of the Barnabas Fund, a Christian charity in the UK.