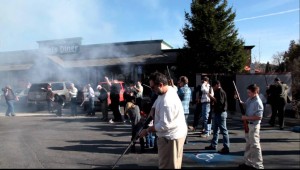 Seasoned Jackson residents knew enough to expect gunshots coming from Main Street on January 7. This year, what they did not anticipate was shots fired from the four cardinal directions on the previous night of January 6. Shotgun blasts have been a local Christmas tradition in these parts since grubstake days. The custom was brought here all the way from the similarly rolling-hill country of Serbia and Montenegro. To be precise, there are now two traditions involving gunfire: one is an old Serbian Orthodox custom which is new to the foothills just this year, and the other is unique to Jackson, but which most locals have always been told is an old Serbian thing. Confused? Let’s back up a little bit.

First of all, why are we talking about a Christmas tradition, when it’s a full week into the new year? Unlike Catholic and Protestant Christians, who celebrate the birth of Jesus the way typical Americans do (according to the Gregorian calendar), most Eastern Orthodox Christians, including Serbs, celebrate Christ’s birth, as well as other fixed Christian holidays, according to the older Julian calendar. This calendar was named after Julius Caesar, who ruled Rome at the time his namesake calendar was established for the whole Roman Empire. The Julian calendar, which is 13 days later than the modern Gregorian calendar, was mostly abandoned by Christian churches of the west in 1582, due to astronomical discrepancies between the Julian and Gregorian observation of heavens. But disliking any changes to the way Christ’s apostles did things in the Roman Empire, most Orthodox Christians, including members of the Russian and Serbian Orthodox Churches, stayed with the old time-marking system. They intended to honor the historical calendar under which Jesus Christ was born, not to mention the Julian calendar dates commemorating the suffering of Christian martyrs under the Roman persecutors and the lives of saints who lived their holy lives in the midst of the pagan Roman Empire.

These historical distinctions may seem trivial today, in modern America, but to the tradition-minded Serbian Orthodox Christians of Amador County who attend St. Sava, the oldest Serbian Orthodox Church in North America, founded in 1894, the two-week gap between the Gregorian celebration Christmas and the Julian observance of Christ’s birth makes all the difference.

But what about those shotgun blasts? Amadorians have been accustomed to believe that the yearly volleys of gunfire exploding from Jackson’s downtown every January 7 are just the way local Serbs have always celebrated Jesus’s birthday. But that’s not quite right, says Protodeacon Triva Pavlov, a retired police officer who is a local expert on all things Serbian Orthodox in this area. “The custom of firing the shotguns into the air in the old country was to notify godfathers and godchildren and relatives who didn’t have a phone or the internet, who would have to make their way to church in the dark with wild animals and other dangers about, that the time for Christmas feast celebrations had come. They have to get the pig ready and to notify that the festal meal was being prepared.” These preparations would took place on Christmas Eve, in anticipation of the next morning when, after celebrating the Divine Liturgy in church, the faithful would gather for a celebratory Christmas feast. This was all well and good for Serbians in Serbia.

After Eastern European Orthodox immigrants made their way from the old country to the Gold Country, settlers from other countries and religious traditions – Italian, Irish and Mexican miners, farmers and others who worked the hills and, of course, Anglo-Saxon Protestants – would notice what a great time the Serbs were having firing off their shotguns during Julian calendar Christmas celebrations. So, local non-Orthodox folks started to join in the fun, too. They would bring their own firearms downtown with local Serbs and fire away in a raucous but happy salute to the joy of season.

The only difference between blasts in the Balkans and the shots in the Sierra was that the former would take place late Christmas Eve (January 6), whereas the latter started happening on the morning of January 7. Gun enthusiasts living in Jackson started to gather every year on the morning of January 7 and then head down to Main Street to fire off their weapons the way they had seen the Serbs do it during their Christmastide. Protodeacon Triva points out that it’s a mistake to think that the Serbs started shooting their guns to celebrate Christmas. It was merely an effective means of communication in hill country before the age of the telephone and the computer.

Getting back to the original tradition is the main reason that, on January 6, 2016, Pavlov and other local Jackson Orthodox made a change to the way things have done been around here as a way of honoring the way things were actually done around there, in the old country, back in the day. This year, the Serbs fired their guns on January 6, as well as on January 7. The Christmas Eve firings were meant to make a correction to what has been the more common Jacksonian tradition, which continued (and probably will continue) as usual. Don’t worry; they always shoot blanks.

At this point, we should note that Protodeacon Triva insists on pointing out that Serbs, Russians and other Orthodox Christians do not observe Christmas on a date that most people call “January 7” because, according to their own view of the church calendar, when the new calendar says January 7, it’s actually December 25 on the old calendar. “The Orthodox old calendarists celebrate it when it’s supposed to be celebrated: on December 25.” To most Americans, it only looks like Serbs and Russians are celebrating Christmas on January 7, because the modern calendar is two weeks ahead of the old Julian one. What this amounts to is Catholics and Protestants having Christmas on December 25 (new style) and then, two weeks later, Orthodox Christians having Christmas on December 25 (old style). Double the Christmas. Double the fun.

If it isn’t complicated enough already, Pavlov remarks that, “Some of the Orthodox decided to go to the new calendar, which the Pope had created. Not everybody was in tune with that. There’s a 13-day difference between December 25 and January 7. Hopefully, they’ll have an ecumenical council this year to work things out.”

Next week, in part two of this story, we will look more deeply into how local Serbs have influenced the way the winter holidays go out with a bang in the Mother Lode.