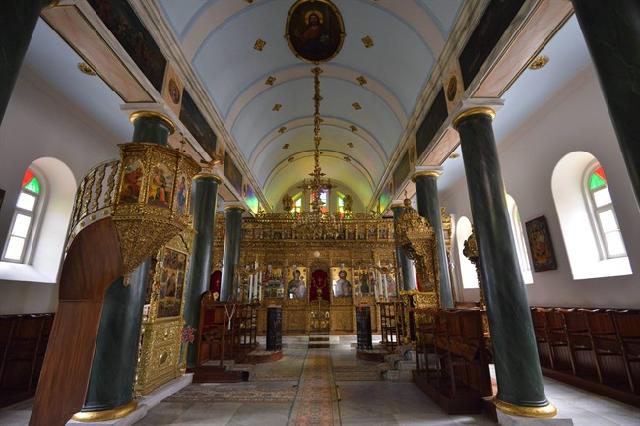 FILE – In this Aug. 3, 2013 file photo, an interior view of the Theological School of Halki, perched atop a hill on Heybeli Island, one of several islands off the coast of Istanbul, which closed its doors in 1971. Although shut down for some 43-years, one of the Orthodox Church’s most pre-eminent seminaries on Heybeli Island, is kept in pristine condition in the hope that it may reopen one day to educate future patriarchs and clergy. (AP Photo/Emrah Gurel, File)

ISTANBUL – Although shut down for more than four decades, one of the Orthodox Church’s most pre-eminent seminaries is kept in pristine condition in the hope that it may reopen one day to educate future patriarchs and clergy.

The Theological School of Halki, perched atop a hill on Heybeli Island off Istanbul’s coast, closed its doors in 1971 under a Turkish law that required private higher education to be controlled by the state. Since then, classrooms with desks dating back to the 19th century are ready to be used again at a moment’s notice while dormitory-style bedrooms await the next class of theological students.

The religious season of Lent began this week and the school isn’t any closer to reopening. But Archbishop Elpidophoros Lambriniadis, whose first name means “he who brings hope,” will be prepared if his prayers are answered.

“If the decision is taken today, tomorrow I am ready to host the first class,” said Lambriniadis, who is in charge of the monastery and the seminary on Heybeli.

Since coming to power in 2002, Prime Minister Recep Tayyip Erdogan’s government has enacted reforms to improve the rights of ethnic and religious groups in Turkey. Despite pressure from the U.S. and the European Union, the status of the seminary remains unsettled.

Erdogan has said Halki’s reopening depends on reciprocal measures from neighbouring Greece that would improve the rights of Muslims there.

“We have two mosques in Athens,” Erdogan has said. “They (Greece) have promised us many times (to open the mosques to worship.) It has been on the agenda for 10 years. Unfortunately, we’re still being strung along.”

The Ecumenical Patriarchate in Istanbul dates from the Orthodox Greek Byzantine Empire, which collapsed when the Muslim Ottoman Turks conquered the Byzantine Empire of Constantinople, today’s Istanbul, in 1453.

The Halki seminary, founded in 1844, was the training centre for many Orthodox leaders, including current Patriarch Bartholomew I, the spiritual leader of more than 250 million Orthodox Christians worldwide.

His patriarchate is considered to be the centre of the Orthodox Christian Church and yet the church can’t train its own clergy, said Istanbul-born Lambriniadis, 46, who was too young to make it to Halki and was forced to study to join the clergy in a Greek seminary.

Suzan Fraser in Ankara contributed to this report.