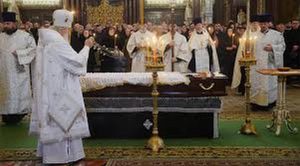 Patriarch Kirill of Moscow and All Russia holds a funeral service for Russian Ambassador to Turkey Andrei Karlov at the Christ the Savior Cathedral. © Grigoriy Sisoev / Sputnik

Russian Ambassador Andrey Karlov, who was shot dead in Ankara, has been buried in Moscow with honors. Russian President Vladimir Putin was among those who bid a final farewell to the slain diplomat, who was named a hero of Russia posthumously.

The funeral for the assassinated ambassador began at the Russian Foreign Ministry in Moscow. Russian President Vladimir Putin attended the ceremony to pay his last respects.

Karlov “became a victim of the vile, heinous terrorist act,” Lavrov said at the ceremony, adding that many of his colleagues and President Putin himself have praised Karlov for his diplomatic skills and “his contribution to the solution of many key problems of our foreign policy.”

Putin signed an Executive Order on Wednesday posthumously awarding Karlov with the title of ‘Hero of the Russian Federation’ “for the fortitude and courage he displayed as an ambassador,” according to the Kremlin.

The burial service was later performed by the head of the Russian Orthodox Church, Patriarch Kirill, at the Cathedral of Christ the Savior in Moscow.

“Andrey Karlov’s life ended tragically. He will be remembered in our history as the Russian ambassador killed in the line of duty. There are a few diplomats like him… His death made him immortal…,” the Patriarch said, adding that he had known Karlov personally.

Karlov was later buried at Khimkinskoye cemetery in Moscow.

A farewell ceremony also took place at an Orthodox church in Pyongyang, North Korea, where Karlov had worked as ambassador before Turkey. Karlov helped initiate the building of two Orthodox churches in North Korea, and he married his wife Marina in one of them back in 2006.

The diplomat was appointed as a fully-authorized ambassador to the Democratic People’s Republic of Korea in 2001, a post he held until 2006.

Karlov was shot dead as he was speaking at the opening of an exhibition called ‘Russia in the Eyes of Turks’ at an art gallery in Ankara. The gunman has been identified as 22-year-old Mevlut Altintas, a member of Ankara’s riot police force.

On July 12, 2013, Karlov was appointed to the position of ambassador to Turkey by a presidential decree and assumed his new post at the Russian embassy in Ankara. As ambassador to Turkey, Karlov oversaw a difficult period in Russian-Turkish relations, which were severely strained when Turkey downed a Russian jet over Syria in 2015.