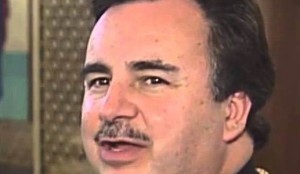 I had written about the so-called “Spiritual” Courts some years ago. The reason that I decided to write about the issue once again is the recent case of Rev. James Dokos, who pled guilty to embezzling funds. And entered into a differed agreement with the authorities in order to avoid imprisonment.

There are two types of “Spiritual” Courts. The First Degree, which is convened on the local level at the Metropolis and the Second Degree on Archdiocesan level.

Specifically, the Eparchial Synod itself becomes a “Spiritual” Court. The First Degree Court submits its proposal to the Eparchial Synod, which in turn sends its recommendation to the Ecumenical Patriarchate of Constantinople for the final action and decision.

I am of the opinion that the “Spiritual” Court on the local and Archdiocesan level is in reality a joke, if you know from inside the behind the scenes intrigues, unholy games and influence.

The way the Spiritual Courts are formed and operate is certainly an insolent flout of the intelligence of every dignified, honest, and thinking person. The local metropolitan selects some priests who are usually his friends with blind obedience to him. He appoints one of them as “chief justice” to preside over the “court” rather than presiding personally, because he wants to state hypocritically the he didn’t have any part in the outcome, claiming that the members of the “Court,” his puppets, acted justly and objectively.

Actually before the meeting, he instructs them what to do and what outcome he expects. I write these things based on firsthand inside information. Clerical members of Spiritual Courts had spoken to me many times – off the record of course – because they are petrified of their superiors, the metropolitans and chancellors. In one instance, for example, a metropolitan was so anxious who was communicating during the “court session” with its members asking them why they were delaying.

The tragicomedy of the whole Spiritual Court issue, which even goes beyond the Dark Ages, is when laypersons are called to the Spiritual Court to be judged by five or six priests for “disobedience” to the Ecclesiastical Authority or for “violation” of the Uniform Parish Regulations, if they dared to ask questions, about a metropolis’ finances, for example.

These shenanigans have made many honest, educated, and faithful parishioners detest the whole process and leave not simply from their involvement in the administration of parishes but from the life of Church altogether. They stop going to church except for Christmas and Easter, and occasionally for funerals, baptisms, and weddings. Their young children see the adult’s reactions to these indescribable “Spiritual” Courts, and they simply laugh and stay away too.

No mention was made in the Statement of Metropolis of Chicago about the outcome decision of its Spiritual Court. It simply stated that “the Spiritual Court convened on Wednesday March 2, 2016, and has submitted its report to the Eparchial Synod of the Greek Orthodox Archdiocese of America for final disposition.”

After Dokos’ guilty plea, the Spiritual Court has just only one option or rather obligation: to propose his defrocking. Anything else would simply be a travesty of justice.

We shouldn’t forget that the Chancellor Bishop Demetrios of Mokissos and also Metropolitan Iakovos of Chicago made unprejudiced efforts to give “cover” to Dokos. Bishop Demetrios received an “honorarium” of thousands of dollars from Dokos. He transferred Dokos from the Milwaukie parish to Glenview, Illinois. He attempted to “interfere” with the attorney’s general search. Along with the “company” of Chicago, they find no wrongdoing by Dokos. Metropolitan Iakovos dared to send a ‘sealed’ letter to the US Court in his desperate attempt to “save” Dokos.

The question is what is going to happen at the Eparchial Synod on April 12? Probably the majority of the members will not recommend Dokos’ defrocking. They won’t want to hurt Metropolitan Iakovos, because he has done favors to them also. Unfortunately, this is how the system works, with a “coffee shop mentality”. We are talking here about a completely sick situation. Everything now depends on the position that Archbishop Demetrios will take as the President of the Synod and as the only ruling hierarch of the Archdiocese.

I think this is what needs to be done: 1) Metropolitan Iakovos should retire now with some dignity before the situation gets completely out of control. 2) Bishop Demetrios should be placed on suspension and asked to leave from Chicago and go to New York. Actually, he is auxiliary Bishop to Archbishop Demetrios, and he serves in Chicago on loan. The situation not only in Chicago but in many other areas has  rotted, and the stench is unbearable.