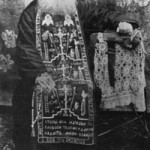 As a young monk St. Elias had spent a short time at the Skete of the Prophet Elias on Mount Athos then at Kiev Caves Monastery in Ukraine, from which he was was forced to leave by the communists.

Having no monastery, the holy Elder also had no shelter. He was often seen following the Divine Liturgy sitting on a bench with nowhere to go. He lived in the homes of various faithful and pious Christians, who considered it a great blessing to give hospitality to one who had a reputation for bearing the gifts of wonderworking and foresight. The communists were never able to capture him, because he would know beforehand when they would come to the home of those he stayed at (as it also happened with St. Matrona of Moscow). He was accompanied at this time till the end of his life by four women, one of whom was ill and another a widow with her daughter.

From 1937 to 1946 he lived in Makeevka, during the time of World War 2, because he foresaw correctly that the city of Makeevka would not see a slaughter with the Germans and that he would not suffer much there, even though the Germans were in the vicinity. Indeed, the war did not come there. There were no bombs, no hunger, no damage.

Even though the Elder leaned on a stick, he was a fast walker, so that even the young and healthy were unable to keep up with him.

He was very kind and gentle, and people would constantly come to speak with him even from far distances. Even if they were ill they would leave comforted. When churches closed by the atheists he would even host priests from Kiev and Moscow. From morning till night he was comforting the people and providing them with assistance from the little he had.

St. Elias was a man of constant prayer, and he read the Gospels, Akathists and Psalms every day. He was often seen sitting on a bench outside the home he stayed at singing hymns. He would teach the faithful to pray, and encouraged them to go to church, saying: “On Sundays and holy days, do not sit at home. Go to church, and all will be well with you.” Even till his last days, despite his weakness, he always attended church services.

Sometimes his advice seemed cruel and came with rebuke, such as when he would see women not wearing a cross. One time two women came to see him, and on the way over one of them said to the other that she was so sinful that she was a dirty pig. The other women said nothing. When they arrived the Elder told the silent woman to stay outside at the door while he received the other who had called herself a dirty pig. She came to his bed where the old man lay, and the woman asked why he did not receive them both. He responded: “People come to me, a lot of people, but pigs have never been here.” The woman screamed at the Elder for insulting her by calling her a pig, but he pointed out that it was out of false humility that she earlier had called herself a dirty pig. Thus the Elder revealed by this apparent insult her own secret pride. He said: “Oh, if pride lives in you, then it is better to keep quiet.”

During the war, in the beginning of each year, he would tell families what vegetable to plant. He thus blessed one family to plant potatoes, another beans, another garlic, and so on. Those who obeyed him received a bountiful harvest with surplus and did not go hungry, while those who did not obey him were miserable.

He would console those who grieved over the loss of their loved ones. One woman received a death notice that her husband had been killed in battle. Deep sorrow came to her, so she visited the Elder. After listening to her, he said: “Go to church, pray diligently, take Communion every Sunday – your husband will return.” The woman listened and did all that he told her. After a while she got a letter from her husband, who was alive. He had been wounded, was unconscious for a long time, and then he was rescued by local residents.

St. Elias would always keep one eye closed. In one photograph however he opened both eyes. When he was asked why, he responded: “I can see the world even with one eye.”

After the war, the Elder finally got his own place to stay. It was in a small house, the funds for the purchase of which he collected from his spiritual children. He lived there until his death. All this time the Elder did not stop to help people and teach them the Orthodox faith.

At this time the Elder predicted future prosperity of Orthodoxy in Makeevka that seemed almost incredible after almost the total destruction of the churches in the city. Yet half a century later the Cathedral of Saint George was built together with 24 other churches. “The Lord will keep until the end Makeevka! He will give it many temples!”

In the beginning of 1946 he told his spiritual children that he would not celebrate Pascha with them. Indeed, the holy Elder Elias reposed on Great Wednesday 17 April 1946. His burial took place on Great and Holy Friday. 66 years later his relics were uncovered at the grave where a monument was built in his honor.

The canonization took place in the Cathedral of Saint George, where his relics are kept.