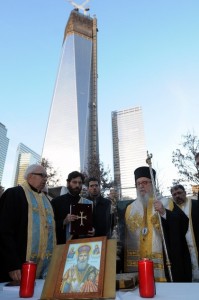 NEW YORK – The annual commemoration of the feast day of St. Nicholas and Trisagion memorial service for the 3000 who perished on September 11, 2001 at Ground Zero was held on December 6 near the site where the Church of St. Nicholas will be rebuilt. Archbishop Demetrios of America presided, assisted by St. Nicholas pastor Fr. John Romas, Archdeacon Panteleimon Papadopoulos, Deacon Aristidis Garinis and other local Orthodox clergy.

The small but enthusiastic group of parishioners and faithful participated in the services, chanting the apolitikion -hymn – of the beloved saint and “Eternal be their Memory,” for the 3000 souls, including more than 50 Greek-Americans whose lives came to an end there and are permanently commemorated just steps away at the magnificent national 9/11 memorial.

Archbishop Demetrios noted that the new church will be a place of prayer and solace for all who visit Ground Zero and an international Orthodox shrine. He said the families of people who died on that fateful day will finally be able to light a candle in memory of their loved ones, and it will be open continually, as was the original church, to those who live and work in the area, and now to visitors from all over the world.

He thanked and congratulated the members of the community at all levels for their efforts and acknowledged the support of public officials such as Mayor Michael Bloomberg – and especially Governor Andrew Cuomo – for their roles in resolving the dispute with the Port Authority of New York and New Jersey which threatened the rebuilding.

The Archbishop was also gracious in welcoming PA officials to the services, including Steve Plate, Director, World Trade Center Construction, who also addressed the gathering and declared “everything is ahead of schedule.”

The Archbishop also invited Greece’s Consul General in New York George Iliopoulos to speak, but he responded that His Eminence has “said it all.” Koula Sophianou, Consul General of Cyprus, said her tenure will have come to an end before the grand opening of the Church, but looked forward to being invited to it and intends to be present.

Michael Donovan, the PA’s Senior Program Manager, agreed that the site would not have been complete without the rebuilt St. Nicholas church. He showed parishioners computer renderings of what the completed site will look like, although the picture of the church was just a placeholder as the design process for the new church has not concluded.

Nicholas Koutsomitis, the project’s lead architect, told TNH there has been a slight delay, with a presentation to the community of renderings and options now expected by the end of January. He noted that although the technical details of the architecture are black and white, “the politics is complicated.”

Attorney Olga Pavlakos, the treasurer of the St. Nicholas parish was moved by the services and expressed her excitement about the rebuilding.

The final agreement was announced personally by Governor Andrew Cuomo on October 29, when he lauded the community for persevering in its efforts to rebuild the church. Hopes were then expressed that the site will be turned over to the Church for a groundbreaking ceremony by the end of next year. When one person said after the services that he looked forward to “seeing things sticking out of the ground by next year’s gathering at the site, Koutsomitis cautioned that won’t happen until 2014. The ultimate target is for the church to be complete in time for the parish’s 100th anniversary in 2016.