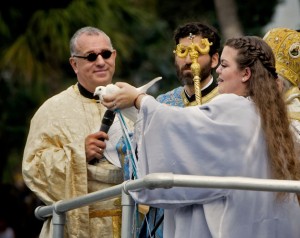 TARPON SPRINGS — The top religious leader at St. Nicholas Greek Orthodox Cathedral has disappeared, leaving behind only an email explaining that he is abandoning not only his job but also the priesthood.

But the lengthy message from Father Anastasios Gounaris offers no answers to the questions being raised by puzzled parishioners: Why did Gounaris quit? Where is he now?

“It just came out of the blue. We were not expecting anything,” said Manias, adding that not even Gounaris’ wife, whom he left behind, knew he was leaving. “He just resigned. That’s it.”

In his email to church members, 900 families in all, Gounaris, known as “Father Taso,” stated that he hopes to be forgiven.

“After much soul-searching, this led to my decision to relinquish my parish duties and leave the active priesthood,” the email, sent Thursday, reads. “I am convinced that no one benefits when a priest has been stretched beyond his human limits.”

Gounaris, who could not be reached for comment, was assigned to head the Tarpon Springs church at 36 N Pinellas Ave. in June 2014. He presided over Epiphany this year. Gounaris, who was 57 at the time, told the Tampa Bay Times after the Greek Orthodox celebration that it was a “boyhood dream come true” to participate.

Angelo Agelatos, owner of Greek Voice radio and TV, said he spoke a few weeks ago with Gounaris and did not suspect anything was wrong.

“We (are) surprised, everybody in the community,” he said. “I don’t know what happened with him.”

“He was inspirational to me,” Tarapani said. “His words of wisdom and what he spoke and the message that he carried.”

Manias, the parish president, said the church is thriving: St. Nicholas has a surplus in operating expenses, is paying off debt, and has plans to construct a chapel, as well as a cathedral at Cycadia Cemetery. Father James Rousakis, who declined comment, will serve in Gounaris’ place until another dean is appointed.

“The church is continuing to progress. We haven’t skipped a beat,” Manias said. “Father Taso did a fantastic job while he was here.”

Another portion of Gounaris’ email reads: “It is, at best, naive to believe that one priest can serve such a busy and thriving parish nonstop without it exacting an emotional and physical toll. … ”

“Change is the only constant in our lives.”