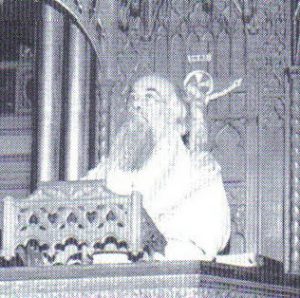 Let us now turn our gaze from the East to the far West, i.e., to America.

About 150 years ago, Orthodox people of every nationality began to come to this New World, first daring individuals, then small groups, until in our days they have reached, by immigration and by birth, a number equal at least to the number of Episcopalians in the United States.

The first settlers were very simple people, hard workers, farmers. They were just the kind of people who were authentic bearers of that threefold Christian ideal, i.e., of spiritual vision, of moral discipline and of competition in doing good. This was the backbone of their souls, inherited from their fathers in the old countries. They lived up to it as much as they could in this country under changed circumstances. And that was, and still is, their greatest contribution to building American civilization, along with their other contributions of sweat and blood—of sweat in mines and factories, and of blood on Americas battlefields.

They never got rich in this rich country, for they had to divide their modest earnings into three parts: one part for their subsistence and the education of their children, a second part they sent to their families in the old country, and the third they gave to church, school, insurance, and charities.

They built churches and called priests from the old country….They preserved their religious traditions. They cultivated the ancient virtues. They delighted in their national music and songs, in their national costumes and dramatic performances. Personally, I have a deep admiration for these old Orthodox generations in America, both for those who passed away in the Faith, and for those who are still living by their faith. They have been a spiritual and constructive component of the New World;s humanity. I dare say that in their own way, they have been heroic generations no less than other national groups, now blended into one great American nation. In their modesty, these humble people never expected a poet to laud them or a historian to describe them.

Alas, the last of these old Orthodox generations is rapidly passing away. Their sons and grandsons, and their daughters and granddaughters are now coming to the field. And this new generation is American born. They speak good English but little or no Greek, Serbian, Russian, Rumanian, Syrian or Albanian. And no wonder: They attended American schools, many of them served in the US army; they have grown in conformity with the American standard of living; their hearts are not divided between two countries. They are naturally Americans, and they intend to remain American. Accordingly, they have some demands respecting the Church of their fathers.

They want English to replace national languages in church services. They desire to hear sermons in English. This is a legitimate desire. Our wise priests of every national Orthodox Church in this country are already preaching in both English and in their respective national tongue. They are in a difficult position at present, for they have on one hand to be considerate of the elderly (elderly generations of Moms and Pops) who do not understand English well; and on the other hand, they are willing to respond to the desire and need of the younger generations. In this matter, I think evolution is better than revolution, for the Church is the mother of both the old and the young.

The time may not be far off when there will be a united Orthodox Church in America, which will include all the present Eastern national Churches in this country, a Church with one central administrative authority. I see a tendency toward such an end in each of our now individual Churches. … And when by God’s Providence the time is ripe for the accomplishment of such a unity, I dare not doubt that the venerable heads of all our Orthodox Churches in Europe, Asia, and Africa, always led by the Holy Spirit, will give their blessing for the organization of a new and autonomous sister Church in America.

And now let me make an appeal to all our American Orthodox youth.

America is your cradle and your earthly motherland. It is a wonderful God’s country, and you are expected to be wonderful God’s people in this country. Remember that our greatest contribution to America is of a spiritual and moral nature. And that is precisely what America needs today. That is what every Christian country today needs most of all — in boundless measure. For all nations, especially the Christians, nowadays are traveling as if in a wilderness of confusion created by senseless materialism and its blind daughter atheism. I offer this to what leading American men and women are saying: “The only hope for us and for the world is to return to religion.” Again I say: “Our hope is in the Church.” You ought to listen to these words, too, and to ponder them. We live in very tragic times, which are made more tragic by easy-going and self-indulgent people who have never read the story of Sodom, of Laish, or of Capernaum.

If I am correct in my observations, the greatest struggle of America these days is the struggle for the priority and superiority of spiritual and moral values over techniques and technological lordship; in other words, for predominance of the spiritual over the material, of goodness over cleverness. The Serbs often say of a clever man: “He is clever as the devil.” They never say: “He is good as the devil.”

America is constantly sounding the sympathetic watchwords: “dignity of man” and “liberty of men and nations.” But the deepest meaning of these watchwords can be found in the sacred teaching of Him without Whom we can do nothing. That meaning is found most explicitly in the threefold program of our Orthodox Church: spiritual vision, moral discipline, and competition in doing good. For the dignity of man — in other words, the superior value of man — has real and eternal meaning only if you know and acknowledge the Kingdom of Heaven as the true fatherland of all men, from which we originated and to which we are returning as children of one common Father, Who is in heaven. And freedom is most useful, joyful, and sacred if you exercise moral discipline over yourself and practice competition in doing good.

These are the fundamentals upon which you can build your individual and communal happiness. And you have received these fundamentals as a glorious heritage, never to part with. By practicing this spiritual heritage in your daily life, you will become an adornment to America. And through you, all Americans will come to know and appreciate our ancient Church of the East and her spiritual heroes, whom we are praising today.