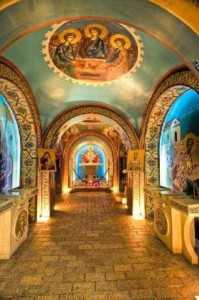 The second annual Blessing of the Animals will be from 2 to 4 p.m. Saturday at St. Photios Greek Orthodox National Shrine, 41 St. George St.

It is the conviction of the Orthodox Christian faith that all creation is holy. His All Holiness, Ecumenical Patriarch Bartholomew of Constantinople, said, “Everything that lives and breathes is sacred and beautiful in the eyes of God.”

The Greek Orthodox Church believes it is the responsibility of human beings to love, honor and care for God’s earth, that he created and blessed every creature that swims in its oceans, walks or crawls on its soil or flies in its skies. For this reason, the church sets aside time to honor God by blessing his animals, which have brought so much joy and happiness and have adorned our lives and the earth.

National Shrine Chaplain, Father George Ioannou will say an ancient Christian prayer known as “The Blessing of the Animals.”

The prayer has been handed down through the centuries from St. Modestos who was a priest and patriarch of Jerusalem.

Born in the year 292 AD, St. Modestos has been known for years as the Orthodox Christian patron saint of animals. During his life, he was known both for his piety and for his respect for animals. His prayer includes a request for the creator’s protection of the animals we love from all illness and injury. The feast of St. Modestos is observed on Dec. 16.

St. Photios Greek Orthodox National Shrine is a memorial established by the Greek Orthodox Archdiocese in America to commemorate the hundreds of Greeks who came to America in 1768 with the Turnbull New Smyrna colony. The most famous Greek of blessed memory on St George Street is Ioannis Giannopoulos also known as Juan Genopoly. He was the son of George and Maria Canelas and hailed from the village of Skoutari, Mani (“New Smyrna, an 18th-Century Greek Odyssey,” EPanagopoulos, Holy Cross Press 1978 p.38). His schoolhouse is a popular St. Augustine attraction within the properties of the Frazier family.