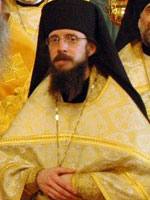 [South Canaan, PA] The Board of Trustees has announced that they have officially appointed the search committee to hire the next Dean of St. Tikhon’s Seminary. More details to follow.

The Board of Trustees of St. Tikhon’s Seminary has also appointed Igumen Sergius, Abbot of St. Tikhon’s Monastery, as the Acting Dean of the seminary until a new Dean can been found.

As acting Dean Fr. Sergius will report directly to the Rector of the Seminary, His Grace Bishop Michael.

The Board of Trustees of St. Tikhon’s Seminary gathered in South Canaan for their spring meeting, March 7-8. All of the Committees of the Board met on Thursday, March 7, and full Board deliberations were conducted on Friday, March 8. Actions of the Board included reports from all committees, adoption of the 2014 budget, and several personnel changes and announcements. This was the first meeting of the Board which His Beatitude, Metropolitan TIKHON, attended as President of the Seminary.

With the full consent of the Board of Trustees, Igumen Sergius (Bowyer),Abbot of St. Tikhon’s Monastery, has been named Interim Dean of the Seminary. He will report to His Grace, Bishop Michael, Rector. The Board is pleased to have an alumnus with many years of experience at the Seminary available to serve in this capacity until a new permanent dean is found. A search committee with representation from the Board, Administration, Faculty, the Monastery, and the student body has been named and will soon begin to search for a suitable candidate for the position of Dean of the Seminary.

At the meeting, His Grace, the Rt. Rev. Michael (Dahulich), Ph.D., was promoted by unanimous decision to the rank of Full Professor. In addition to his duties as Diocesan Bishop of New York and New Jersey, and Rector of the Seminary, Bishop Michael maintains a heavy teaching schedule and has been on the Seminary’s faculty since 1994. He teaches in and chairs the Scripture Department. The Board was pleased to recognize him for all his many years of service to the Seminary as well as the quality of his teaching.

In financial matters, Treasurer David Jarrett and CFO V. Rev. Dennis Swencki presented the 2013 YTD financial report as well as the 2014 Budget. The Board accepted the 2014 Budget. Reports were also given from committees on Married Student Housing, Strategic Planning, Building and Grounds, Development and Public Affairs, and Human Resources.

The 75th Anniversary Committee also met and presented a full schedule of activities for the months ahead. An Anniversary Celebration is scheduled for Thursday, October 10, 2013. Activities for the day include a morning Academic Convocation, Panikhida and Molieben services at the Monastery Church at 3:00 PM: and a Reception and Grand Banquet, at 5:00 PM at Fiorelli’s, Peckville, PA. Other Anniversary celebrations and commemorations, including activities during the Annual St. Tikhon’s Pilgrimage, will be posted on this website.

In other personnel news, David Ford, Ph.D., Professor of Church History, was granted a sabbatical for 2014. Paul Chernay, a member of the Board of Trustees for many years, was named Trustee Emeritus.

The Seminary community took the opportunity of Metropolitan Tikhon’s return to the Seminary to honor him with a dinner on Thursday evening at the Seminary auditorium. Several Board members were in attendance and Board Chair, Michael Herzak offered the appreciation and well wishes of all the trustees to His Beatitude, Metropolitan Tikhon, whose primatial duties now include serving as President of the Seminary.