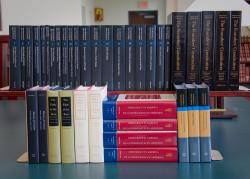 Donated books from the Liberty Fund

In July of 2012, The Very Rev. Dr. Chad Hatfield, chancellor/CEO of St. Vladimir’s Orthodox Theological Seminary (SVOTS), received a letter from T. Alan Russell, Chairman of the Board for the Liberty Fund of Indianapolis, IN, informing him that Liberty’s Board of Trustees had selected St. Vladimir’s for a Book Placement. This award allowed SVOTS to select any of the books from the Liberty Fund’s catalog, facilitating a sizable donation to the Father Georges Florovsky Library at the Seminary.

“I met Alan Russell at the Hogar Rafael Ayau Orphanage in Guatemala during the Seminary’s June missions trip,” explained Fr. Chad. “We had several discussions about the developing missiological emphasis here at SVOTS, and he resonated with my statement that ‘Christian mission today should be entrepreneurial in nature’. From that conversation forward, he became an advocate to expand our library collection with Liberty Fund publications.” 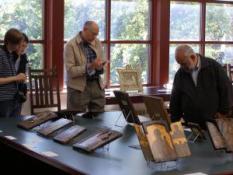 According to the Liberty Fund website, the Fund was “established to encourage the study of the ideal of a society of free and responsible individuals…(and) to foster thought and encourage discourse on enduring issues pertaining to liberty.” Librarian Eleana Silk explained that the twenty–six boxes of books given to the Florovsky Library from the Book Placement cover both ancient political philosophy and American historical topics, such as the Constitution of the United States, and the collected works of several American presidents. “These works give us an expanded offering of philosophers and economics that are most welcome,” noted Chancellor Hatfield.

In his letter of acknowledgement to the Liberty Fund, Fr. Chad wrote:

Dear Allan and Friends at the Liberty Fund,

Greetings from St. Vladimir’s Orthodox Seminary! The Liberty Fund Collection has safely arrived at our library and I want to thank you all for your efforts and confidence in bringing this splendid collection into the sphere of our Orthodox seminarians. They will be much used and are much appreciated!

Wishing you and your families a most blessed American Thanksgiving.

The Father Georges Florovsky Library, now holding over 180,000 volumes and in receipt of over 330 periodicals each year, is considered one of the richest resources available in the North American continent for research in Eastern Christianity. “Not only do we accept donations of books in good physical condition with appropriate subject matter,” said Ms. Silk, “but we also act as a clearing house for Orthodox books nationwide. Titles we can’t use, we send to other places, either to seminaries like St. Tikhon’s, St. Herman, and St. Nersess, or to other organizations in need of good books.”