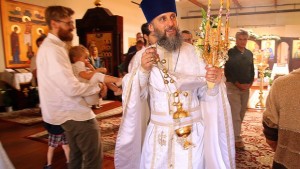 CARLSBAD — One of the oldest religious institutions in the world has opened a new church in Carlsbad, where there’s standing room only at every service.

St. Katherine Orthodox Mission Church was founded in 2011 in Encinitas, but it’s part of the third-largest Christian church in the world, with roots and traditions dating to the beginning of Christianity.

One of the traditions practiced at St. Katherine’s is that the congregation stands throughout the services, which can last as long as two hours.

“Every church used to do this until pews were introduced in the 1600s,” said the Rev. Dr. Andrew Cuneo, who founded the church. “It’s just a lot easier to pay attention when you stand.”

Among more than a dozen Orthodox churches in San Diego County, St. Katherine’s and a small Orthodox church on Camp Pendleton are the only ones that take the practice so far that they don’t even have pews. In other Orthodox churches that offer seating, members still spend much of the services on their feet.

It may help that there’s a lot of music and motion during the services, which are almost entirely chanted or sung, Cuneo said. Participants often bow deeply or gesture.

Children are allowed to sit at the feet of their parents, and benches or chairs are available at a side wall for the elderly, pregnant, infirm or others who cannot stand.

St. Katherine’s has grown rapidly from its original three families to about 80 members now, Cuneo said.

“People are hungry for traditional and reverential worship,” he said.

The church outgrew its Encinitas location and a search for a larger place turned up a suite available in an industrial building on Loker Avenue.

The Rev. Father Jerome Cwiklinski, a retired Navy chaplain and former pastor of the Orthodox church for military families at Camp Pendleton, said he’s attended a number of the St. Katherine’s services.

“We’ve needed a church in North County that was accessible to civilians for a long time,” Cwiklinski said.

Half the rented suite is offices and meeting rooms, and half is a former warehouse that has been turned into a warm sanctuary with new flooring, rugs, traditional icons on the walls, oil lamps and candles.

“There’s an emphasis in a lot of Orthodox churches on using all natural materials,” Cuneo said. The candles are made of beeswax, and the lamps burn olive oil.

After almost every service there’s a meal prepared by teams of church families.

“The Orthodox love to feast,” the priest said.

San Diego County has about 14 Orthodox churches, including several in North County. The largest include Sts. Constantine and Helen Greek Orthodox Church in Cardiff, which hosts a large two-day Greek festival every year in September.

Cuneo said that about 40 percent of the families at St. Katherine’s have Slavic backgrounds, but the rest are of diverse ethnic origins.

“We see ourselves as part of the community,” he said. “We want to bring the light of Christ to everybody.”