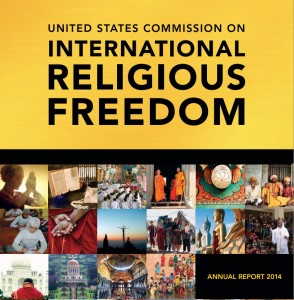 WASHINGTON, DC –  Anthony Kouzounis, supreme president of the American Hellenic Educational Progressive Association (AHEPA), the largest and oldest membership-based association for the nation’s millions of American citizens of Greek heritage and Philhellenes, issued the following statement on the United States Commission on International Religious Freedom’s release of its 2014 Annual Report on April 30:

“The return of Turkey’s designation to ‘Tier Two’ country status rectifies to some extent the Commission’s egregious and disappointing designation last year that significantly upgraded Turkey to a country that simply needed to be ‘monitored.’

“The Commission’s 2014 report properly documents many of the impediments to full religious freedom for the Ecumenical Patriarchate. This includes the Turkish government’s ‘failure to follow through’ on its promise to reopen the Greek Orthodox Theological School of Halki, which the Commission describes as ‘a disturbing indication of a lack of genuine will to resolve this longstanding religious freedom violation.’ The report specially cites the promises made by Prime Minister Erdogan and President Gul to reopen the seminary. Other examples of religious freedom suppression are cited, including the Turkish government’s interference in the internal affairs of the Greek Orthodox and Armenian Patriarchates and its seizure and failure to return the balance of properties illegally seized from religious minorities. AHEPA is disappointed the report does not mention or address Turkey’s failure to recognize the Patriarch’s ‘ecumenical’ title, which is recognized by the rest of the world.

“Moreover, the report lists as concerns ‘persistent religious freedom violations in the Turkish-occupied northern part of Cyprus’ and anti-Semitism in Turkey and notes that Turkey’s ‘overall landscape for democracy and human rights has deteriorated significantly during the past year.’ AHEPA finds all of these concerns valid and troubling. AHEPA contends the erosion of democracy and human rights in Turkey, as evidenced by restrictions on Internet and media freedom as noted by the Committee, in addition to the restrictions placed on religious freedom, is serious enough to have warranted the Committee’s designation of Turkey a ‘country of particular concern’ as it did in 2012.

“AHEPA welcomes the report’s inclusion that communities were ‘extremely disheartened’ with the rumors that Hagia Sophia would be converted to a mosque and the report identifies Hagia Sophia’s symbolic importance to Christian history and to Turkey’s Christian communities.

“Finally, AHEPA has welcomed steps in the right direction in recent years by Turkey when it comes to lifting restrictions on religious freedom, including the return of property to the Theological School of Halki in January 2013 and allowing liturgies to be conducted at religious sites. However, it is in the best interest of the United States for the U.S. government to adopt and implement all of the recommendations set-forth by the United States Commission on International Religious Freedom in its 2014 report on Turkey.”

Founded in 1922 in Atlanta, Georgia, to protect individuals from the evils of bigotry and discrimination, AHEPA is the largest and oldest grassroots association of American citizens of Greek heritage and Philhellenes with more than 400 chapters across the United States, Canada, Greece and Cyprus. The mission of AHEPA is to promote the ancient Greek ideals of Education, Philanthropy, Civic Responsibility, and Family and Individual Excellence through community service and volunteerism.