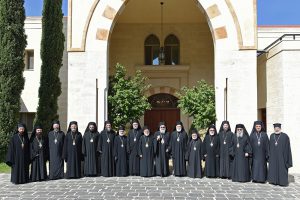 Holy Synod of the Patriarchate of Antioch

Source: Greek Orthodox Patriarchate of Antioch and All the East

At the end of the seventh extraordinary session which begun on May 25th 2016, the Holy Synod of Antioch convened on June 27, 2016 in Balamand. The Synod was presided by His Beatitude Patriarch John X, with the participation of the Bishops of the Holy See of Antioch,

The fathers congratulated their children on the occasion of the feast of Saints Peter and Paul, the holy, glorious and all-praised leaders of the Apostles, and the founders of the Holy See of Antioch. This See is where the disciples were called Christians first, and where its children continue to witness for the Risen Christ, especially in our beloved Antioch, and in Syria the martyr, in Lebanon the sufferer, in Iraq the injured, and in all the Gulf countries and the Archdioceses abroad, in the Americas, Australia and Europe. The Fathers recalled their brother Metropolitan Paul (Yazigi), the Archbishop of Aleppo who has been kidnapped for more than three years, amidst willful blindness by all. His Eminence Metropolitan Paul, along with his brother Metropolitan Youhanna (Ibrahim), and all those kidnapped constantly remain present in the prayers and supplications of the faithful and in the daily Church testimony. The fathers lift up their prayers for the repose of the souls of all those martyred because of being called Christian, and ask their prayers before the Divine Throne, that God may strengthen His Church and give His children the power and wisdom to faithfully witness, here and now, Christ Risen from the dead.

The fathers discussed the issue of the Great Orthodox Council, which the Orthodox Church has prepared to convene since more than fifty years. The Antiochian Church had asked to delay the convocation of this Council, in order to strengthen the Pan-Orthodox unity, secure Orthodox unanimity on the debatable issues of its agenda, and that the ecclesiological conditions open up for the participation of all the Orthodox Autocephalous Churches.

Whereas the Antiochian request to delay the Council, along with the requests of the Russian, Bulgarian, and Georgian Churches, were not accepted, and whereas it was originally intended for the Council to be a pan Orthodox Council, but was convened in the absence of four Autocephalous Churches representing more than half of the Orthodox faithful in the world,

Whereas the call to this meeting has ignored the necessity of establishing Orthodox conciliarity on the basis of total Eucharistic communion among the Churches, which is the basis for the formation of this conciliarity, especially by ignoring to seek a solution to the Jerusalemite aggression on the canonical jurisdiction of the See of Antioch before the convocation of the Council, through a decision made by the Ecumenical Patriarchate to delay the negotiation till after the Council,

Whereas the statements and declarations issued by the participants unjustly blamed the absent Churches, and did not blame the side that was leading the preparatory stage,
And after looking into the statements of the ambiance, statements, and positions made in the meeting at the island of Crete, and all the fallacies that circulated recently, the fathers made the following observations:

First: The fathers affirm that the common Orthodox work is based on the participation and unanimity of all the Orthodox Autocephalous Churches. They like to remind that this principle is not a new Antiochian position, but is a fixed Orthodox principle established by the Ecumenical Patriarch Athenagoras of Thrice Blessed memory upon launching the preparatory work for the Council. He was followed by his successor Patriarch Dimitrios of Thrice Blessed memory in whose era the regulations for the preparatory pre-conciliar meetings were formulated. The articles of these regulations clearly show that the call for any conciliar work, even if it was on the level of a preparatory meeting, is done by the Ecumenical Patriarch, after the approval of all the Churches’ Primates, and that all decisions are taken unanimously, by all Autocephalous Churches before they are submitted to the Great Council.

Second: The fathers recalled that His Holiness the Ecumenical Patriarch Bartholomew had emphasized as well this principle during the pre-conciliar preparatory meetings. Particularly, he decided to suspend the works of the preparatory committee in 1999, because of the withdrawal of one church from the above-mentioned meeting. This issue resulted in putting off the preparatory works for the Great Council for a period of ten years. The fathers wondered about how could it be that one church’s absence led to the suspension of the preparatory work of the Council, while some consider that it is permissible for the “Great Council” to convene and meet in the absence of four autocephalous Orthodox Churches!

Third: The fathers noted that the principle of unanimity was reaffirmed upon the re-launching of the preparatory works of the Council in 2009. During the fourth preparatory conference held in 2009, the Antiochian delegation advisor Mr. Albert Laham of blessed memory emphasized the necessity of this principle in the process of decision taking, reminding that if there is no unanimity on one subject, this subject is deferred to the preparatory committee for further study, as the Rules of Procedure of Pan-Orthodox Pre-Council Conferences state. At that time, this proposal was welcomed by all participating Churches, including the conference chairman. This proposal had led to taking a decision about the issue of the Diaspora and the Episcopal Assemblies.

Fourth: The fathers reiterate that the Antiochian position calling for building up accord through assuring the unanimity of all Autocephalous Orthodox Churches on the subjects of the agenda had as a purpose to strengthen Orthodox unity in the preparatory phase, according to the Orthodox tradition. The Church of Antioch did not expect that this stable principle, which She just reminded of, would become a controversial issue, and this stable principle be defied by those who originally established it and defended it as a guarantee to Orthodox unity. This unity cannot be achieved if any of the Churches is excluded from the decision making process, or if Her proposals are ignored. Here, we would like to mention the fact that the Synaxis of the Churches’ Primates held in January 2014 has affirmed this principle when it decided to have all decisions worked during the Council and the preparatory period to be taken by consensus. The fathers ask how can this consensus be achieved with the refusal of the Antiochian Church to the decisions of the aforementioned synaxis (2014) and the Chambésy Synaxis (2016)? How could this consensus be achieved in Crete in the absence of four Orthodox Churches?

Fifth: The Fathers reaffirm that the Antiochian position requesting the postponement of the Great Councils convocation in case of the absence of unanimity on its subjects was not a new position. The Antiochian Church has clearly expressed about her position throughout all preparatory phases of the Council during the last two years. This position was in accordance with the role of Antioch had, always refusing to ignore any Autocephalous Church in the common Orthodox work. Therefore, all that was published in the media about the implicit acceptance of the Antiochian Church to participate in the Council was incorrect, and all the analysis about the political dimensions of the absence of Antioch from the Crete meeting remains as a totally false political analysis. The acceptance of Antioch by economia to participate in the preparatory works does not mean concession on Her part about the aforementioned positions. Rather, Her participation was an effort to remove all obstacles which was, and still is, preventing the convocation of the Council.

Sixth: The fathers are surprised by the positions of some Churches which have recently called to bypass the principle of unanimity, or interpreting this principle in a different manner than what state the Rules of Procedure of Pan-Orthodox Pre-Council Conferences, adopted in 1986, signed by all representatives, and used accordingly even during the fifth preparatory conference held in October 2015. They are also surprised by all the positions that were recently declaring that the convocation of the Council on the specified date is more important than the conciliarity of the Church and Her unity. In this regard, the Church of Antioch would like to thank all the Churches that endorsed her rightful position, especially the Churches of Russia, Georgia, Bulgaria, and Serbia.

Seventh: The Fathers would like to remind their brethren meeting in Crete of Article 17 of the Rules of Procedure of Pan-Orthodox Pre-Council Conferences adopted in 1986 which considers that, “In case one specific subject, discussed during the conference, is not accepted unanimously, the decision about it is abandoned and it is deferred to the Secretariat of the pre-conciliar preparatory meeting for further study and preparation according to the process known on the Pan-Orthodox level.” Also, the content of the fourth article of the same Rules of Procedure states that: “It is not allowed to remove or add any subject on this list of subjects which were prepared and agreed upon on the Pan-Orthodox level, at least till after its study ends. After that the Great and Holy Council convenes.” The fathers wonder how could the call to convene the Great Council be issued before completing the preparatory work on the subjects of the Agenda: two Churches have reservations about the document “Marriage and its Impediments”, and the Antiochian Church’s refusal to remove three main subjects from the Agenda (Church Calendar, Diptychs, and Autocephaly and its Proclamation)

Thus, the fathers of the Holy Synod of Antioch noted that the meeting in Crete does not even have the required conditions to convene the pre-conciliar conference for the Great Council, this according to the Rules of Procedure of Pan-Orthodox Pre-Council Conferences, adopted in 1986, and which is still valid to date. These Rules of Procedure state that the convocation of this conference requires the approval of the Primates of all the local Orthodox Churches (Article Two), and that decision taking during it is done by the unanimity of all the Orthodox Autocephalous Churches (Article Sixteen), and these conditions were not available in the meeting in Crete.

The Fathers of the Holy Synod unanimously decided the following:

1. Consider the meeting in Crete as a preliminary meeting towards the Pan-Orthodox Council, thus to consider its documents not final, but still open to discussion and amendment upon the convocation of the Great Panorthodox Council in the presence and participation of all the Autocephalous Orthodox Churches.

2. Refuse assigning a conciliar character to any Orthodox meeting that does not involve all the Orthodox Autocephalous Churches, and to underline that the principle of unanimity remains the essential foundation for the common Orthodox relationships. Thus, the Church of Antioch refuses that the meeting in Crete be called a “Great Orthodox Council” or a “Great Holy Council.”

3. Affirm that whatever was issued in the meeting in Crete, of decisions and other things, is non-binding, by any means, to the Patriarchate of Antioch and all the East.

4. Commission the “Committee for the Follow-Up on the Council’s Issues” to study the results and consequences of the meeting in Crete and offer a detailed report to the Holy Synod of Antioch in its next meeting.

5. Send a letter about the decision of the Holy Synod of Antioch to all the Autocephalous Orthodox Churches, as well as to the civil and religious authorities abroad.

6. Call upon the faithful to accompany the fathers of the Holy Synod of Antioch by praying for the preservation and the total manifestation of the unity of the Orthodox Christian witness in today’s world.

NB: The original Arabic text is the only binding text in case of any misinterpretation.