A Gospel reading for the scandal in the church. 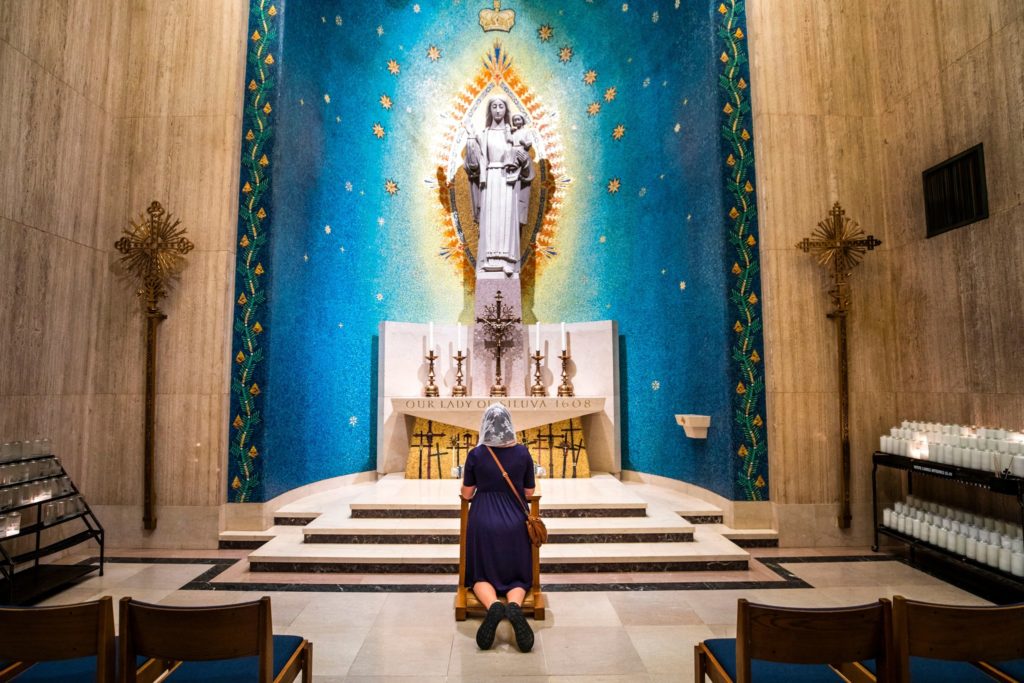 A visitor prays in the Basilica of the National Shrine of the Immaculate Conception, the nation’s largest Catholic church, in Washington, D.C.CreditCreditJim Lo Scalzo/EPA, via Shutterstock

At Mass this Christmas Eve, many Catholics who have spent a year reading headlines about abusive priests, indifferent bishops, predatory cardinals and Vatican corruption will sit and hear the long roll of Jesus’s ancestors with which the Gospel of Matthew begins.

“Unless you like stats / just skip the begats,” wrote Jeanne and William Steig in their “Old Testament Made Easy.” But before he gets to the angels and the wise men Matthew gives us 39 of them, from the famous names (“Abraham begat Isaac … David begat Solomon”) to the rather more esoteric, like Jechoniah, the father of Shealtiel.

If you only know the Bible vaguely, this litany of names probably sounds a bit pompous, an attempt to elevate the infant Jesus by linking him to great patriarchs and noble kings. But the truth is roughly the opposite: The more you know about Genesis or Chronicles or Kings, the more remarkable it is that Matthew announced the birth of the son of God by linking him to a pack of egregious sinners.

I’m stealing this point from an essay by a 20th-century Dominican priest, the late Rev. Herbert McCabe, which was recently excerpted by the important Catholic Twitter account known as Woke Space Jesuit. Matthew’s genealogy, McCabe writes, link Jesus explicitly to “the squalid realities of human life and sex and politics.” Then he offers examples of just how squalid things got among those long-dead Israelites.

Take a line like “Judah begat Perez and Zerah of Tamar.” Just a typical nuclear family, right? Here’s McCabe with the real story: “Judah slept … by mistake, with his daughter-in-law Tamar: She had cheated him by disguising herself and dressing up as a prostitute … [When] Judah heard that his daughter-in-law had prostituted herself and become pregnant, he ordered her to be burnt alive. He was disconcerted when he discovered that he himself had been the client and that the child, Perez, was his.”

Or again: “David begat Solomon of her that had been the wife of Uriah.” That “her,” of course, is Bathsheba, upon whom David spied while she bathed and then contrived to marry by murdering her husband; the result of this wickedness was the future King Solomon, “the next in the line of succession,” McCabe notes dryly, “toward Christ our savior.”

And David was Israel’s greatest king; the line that follows him in Matthew includes a few decent men but also a collection of tyrants, child-murderers and worse, none of them remotely pious and many actively at war with the prophets sent by God.

Crucially, in claiming the divine is entering the world through this line of “murderers, cheats, cowards, adulterers and liars,” Matthew isn’t offering some particularly Christian innovation within the larger biblical story. He’s simply picking up what his own people, the Jewish people, already said about themselves: We’re the chosen people of the one true God, and to prove it to you here’s a long story about how awful and promiscuous and murderous and fallible we are, how terrible our leaders often turned out to be, and how we deserved every exile and punishment we received.

If you don’t find that message credible, well, I understand. But if you find it strangely compelling, then you’re close to the case for remaining Catholic at a time when the corruption of the church is driving a number of very public defections from the faith.

I promised to make a version of that case-for-staying-Catholic a few weeks ago, but there isn’t much I could say that isn’t right there in the Christmas-season bridge between the Old Testament and the New, in the history of the Jewish people that Christians claim as their own.

The idea that biblical religion has always proposed is emphatically notthat you can tell whether a people is chosen by the virtue of their leaders. It’s that the divine chooses to act constantly amid not just ordinary fallibility but real depravity — that strong temptations as well as great sanctity are concentrated where God wants to work — and that the graces that define a chosen people are improbable resilience and unlooked-for renewal, with saints and prophets and reformers carrying things forward despite corruptions that seem like they should extinguish the whole thing.

The case for remaining Catholic in this moment, then, is basically that all this has happened before and will happen again — in what G.K. Chesterton once called the “five deaths of the faith,” the moments across two thousand years when every human probability pointed to the church of Rome passing into history, becoming one with Nineveh and Tyre.

For American Catholics at least, this era feels understandably like another death — in which the saints seem hidden, the would-be prophets don’t agree with one another, the reformers keep losing. And it is all-too-understandable that people would choose to leave a dying church.

But it is the season’s promise, and in the long run its testable hypothesis, that those who stay and pray and fight will see it improbably reborn.

Ross Douthat has been an Opinion columnist for The Times since 2009. He is the author of several books, most recently, “To Change the Church: Pope Francis and the Future of Catholicism.”