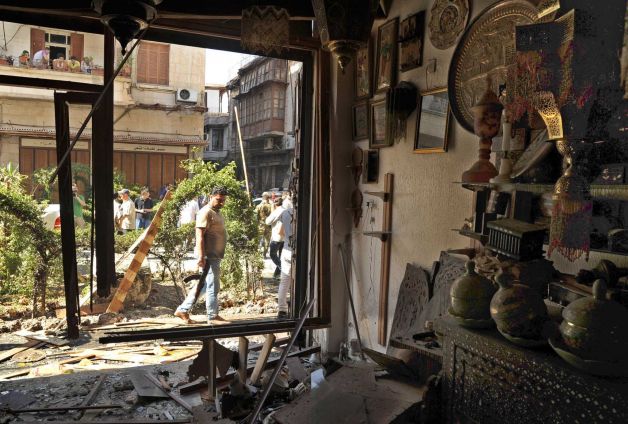 This photo released by the Syrian official news agency SANA, shows a Syrian security agent looking at a damaged antique shop after a blast struck in the vicinity of the Greek Orthodox Virgin Mary Church in the predominantly Christian neighborhood of Bab Sharqi in central Damascus, Syria, Thursday, June 27, 2013. A suicide attacker blew himself up near one of the main churches in the Syrian capital Thursday, killing several people, state-run TV said. Photo: SANA

DAMASCUS, Syria (AP) — A suicide bomber blew himself up near the headquarters of Syria’s Greek Orthodox Church in Damascus‘ Old City, killing at least four people Thursday, minutes after the patriarch had entered the cathedral, state-run TV and a church official said.

The blast in the ancient quarter of narrow streets and historic buildings was the first reported suicide attack of the Syrian civil war inside the Old City, although other such bombs have struck the capital of Damascus during the conflict.

The blast struck in the vicinity of the Virgin Mary Cathedral in the predominantly Christian neighborhood of Bab Sharqi, the broadcast said, although it was not clear if the church was the attacker’s target.

SANA, Syria’s state-run news agency, said a nearby clinic run by a Muslim charity appeared to be the target. That was also the view of Bishop Ghattas Hazim, who spoke toThe Associated Press from Lebanon.

Lebanon’s Al-Mayadeen TV, which has reporters in Damascus, said the target of the attack appeared to be a nearby post of the National Defense Forces, a paramilitary force fighting the rebels who are trying to topple President Bashar Assad.

Residents also disagreed about the target, with some saying the bomber may have detonated the explosives prematurely. Pro-government gunmen were seen roaming the streets afterward.

The blast occurred nearly 15 minutes after John Yazigi, the Eastern Orthodox Patriarch of Antioch and All the East, entered the church, but he was unhurt, according to Hazim, an aide.

A government official told the AP that the bomber was wearing a belt of explosives and blew himself up near the church. Both the official, who spoke on condition of anonymity because he was not authorized to talk to the media, and state TV said at least four people were killed. SANA said eight people were wounded.

An AP reporter who visited the area saw that the explosion occurred about 50 meters (yards) from the church and damaged several shops. An antiques shop suffered the worst damage, with its windows shattered and objects strewn about.

“I heard an explosion. Then glass started flying, and the place was full of dust,” said shop owner Abdo Muqri, whose right arm and forehead were injured. “I was watching television inside. Had I been near the door, I would have been dead.”

State-owned Al-Ikhbariya TV showed a body near the shop.

About three hours after the blast, two shells struck the area. A wounded man and woman were seen being rushed away.

Bab Sharqi and the nearby Bab Touma, two main areas of the Old City, were famous for their restaurants and cafes that used to be packed until late at night before the civil war began.

The Britain-based Syrian Observatory for Human Rights estimated this week that more than 100,000 people have been killed since the start of the conflict more than two years ago. It began with peaceful protests against Assad’s rule, then became an armed conflict after the regime used the army to crack down on dissent and some opposition supporters took up weapons to fight back.

Churches have been targeted before in the civil war, mostly in the central city of Homs and Syria’s largest city of Aleppo in the north.

Yazigi divides his time between Damascus and the Balamand Monastery in northern Lebanon. Yazigi took the post of patriarch earlier this year replacing Ignatius Hazim, who died in December.

One of the gravest attacks against Christians came in April when two bishops, including Yazigi’s brother, Boulos, were kidnapped in a rebel-held area in northern Syria. He is still missing.

Christians are one of the largest religious minorities in Syria, making up about 10 percent of the population of 23 million people. They have tried to stay on the sidelines of the conflict, although as Islamic militants have increasingly joined with the opposition, many Christians have been leaning toward the regime.

As the bloodshed has intensified, hopes for an international conference to try to reach a political settlement between the regime and opposition have faded. Washington and its allies have said they will help arm the rebels.

In Berlin, German Chancellor Angela Merkelwarned against shipping weapons to the rebels, telling parliament that in her view, “the risks would be incalculable.”

She did not explain why, but critics fear that Western arms would only prolong the conflict without tipping the scales decisively. There are also concerns that the weapons, including anti-aircraft missiles, could fall into the hands of Islamic extremists who might use them against Western targets.

“Whether it would be successful or not is a different question, but in my view the risks would be incalculable,” Merkel said. “But I think everyone who has a heart understands the wish to stop the killing in Syria and to remove the Assad regime.”

In Moscow, the Defense Ministry said that Russia has withdrawn all military personnel from its naval base in Syria and replaced them with civilian workers.

The ministry did not say when the switch at the base at Tartus took place or how many personnel were deployed there. The minor facility is Russia’s only naval outpost outside the former Soviet Union and consists of several barracks and depots used to service Russian navy ships in the Mediterranean.

The ministry statement said that Tartus has continued to service the Russian navy ships.

The ministry didn’t explain why it was replacing military personnel with civilians, but the move could be part of efforts by Moscow to portray itself as an objective mediator trying to broker peace talks in the civil war.

Russia has been Assad’s main ally, shielding his regime from the U.N. Security Council’s sanctions and continuing to provide it with weapons.

Moscow also has an unknown number of military advisers in Syria who help its military operate and maintain Soviet- and Russian-built weapons that make up the core of its arsenal.