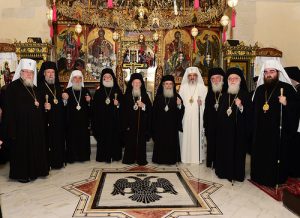 Source: Press Office of the Holy and Great Council

CRETE — Following a doxology and morning prayer service, His All-Holiness Ecumenical Patriarch Bartholomew convened the Synaxis (gathering) of the Primates of the local autocephalous Orthodox Churches. This meeting was scheduled in January 2016 to provide the Primates the opportunity to review a draft of the Council’s Message, review the Council’s agenda, and address outstanding matters. During their deliberations, the Primates acknowledged that they are pained by the absence of the Patriarchate of Antioch, and the Churches of Russia, Bulgaria, and Georgia. They expressed their prayers that the Holy Spirit would inspire them to attend the Council.

Photos for use without modification or alteration are available at https://www.orthodoxcouncil.org/photos.

A website, www.orthodoxcouncil.org, provides background information on the Holy and Great Council, which is meeting in Crete June 16-27 and gathers hundreds of representatives from the autocephalous (internally self-governing) Orthodox Churches to discuss issues ranging from the mission of the Orthodox Church in the modern world and its relations with other Christian churches, to the importance of fasting and the sacrament of marriage.

Share. Twitter Facebook Pinterest LinkedIn Tumblr Email
Previous ArticleUPDATED: Answers to Questions About the Holy and Great Council, Answered by Fr. John Chryssavgis
Next Article MESSAGE OF HIS HOLINESS PATRIARCH KIRILL TO PRIMATES AND REPRESENTATIVES OF LOCAL ORTHODOX CHURCHES WHO HAVE ASSEMBLED IN CRETE