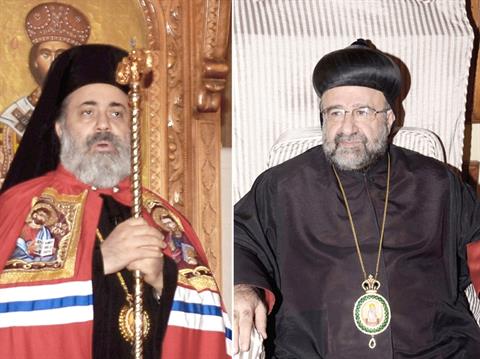 In this undated combo picture released by the Syrian official news agency SANA, Bishop Boulos Yazigi of the Greek Orthodox Church, left, and John Ibrahim of the Assyrian Orthodox Church, right, who were kidnapped Monday, in the northern province of Aleppo, Syria. (AP Photo/SANA)

ISTANBUL: Two Orthodox bishops kidnapped in Syria last month are “in good health,” though there is no news on their whereabouts, an opposition official told reporters Saturday in Istanbul.

“Two or three days ago, a doctor visited the two bishops. They are in good health,” said Abdul Ahad Steipho, member of the main opposition’s National Coalition and of its committee established to follow up on the kidnappings.

Steipho added that his committee’s attempts to enter into direct telephone contact with the kidnappers or the bishops have so far failed.

“We are receiving a lot of contradictory information on the identity of the kidnappers and their demands for ransom,” he said.

Asked about any other leads the Coalition had, the dissident said: “These kidnappings are sometimes carried out by criminal gangs… other times by the regime (of President Bashar al-Assad) and sometimes by the brigades of the (rebel) Free Syrian Army, who use kidnappings as a way to exchange prisoners.”

“The two bishops are well known in Syria for their humanitarian work, and their defence of peaceful coexistence among religious groups in Syrian society,” said Steipho.

Their kidnapping “sends a signal to Christians in Syria and other countries in the Middle East… For these reasons we want to ensure they are released,” he added.

The two bishops, Yohanna Ibrahim and Boulos Yaziji, were kidnapped at the end of April, reportedly near the rebel-held town of Kafr Dael, near Aleppo in northern Syria.

No group has claimed responsibility for their kidnap, but sources close to the Greek Orthodox Church and the Syrian authorities have claimed the kidnappers were “Chechen jihadists”.

Christians constitute some five percent of Syria’s population, a patchwork of religious and ethnic groups.

Rights groups say Christians are especially vulnerable in the chaos that has engulfed Syria ever since the outbreak of a conflict in March 2011, which has so far killed some 90,000 people.