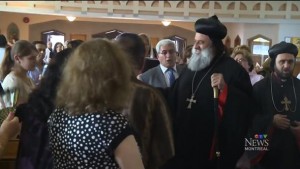 As the world tries to figure out how to respond to the millions of Syrian refugees fleeing war and strife, the leader of the Syrian Orthodox Church gave his take while in Laval on Sunday.

“The world should unite in order to defeat terrorism and to restore peace to Syria, to Iraq and to the entire region,” said Morignatius Aphrem II, Patriarch of the Syriac Orthodox Church. “I’m saddened by the fact that it took the photo of a young boy floating on the shore to draw the attention of the world to the huge crisis of refugees.”

“And even more, it saddens me also to see that this has somehow become an issue in the elections, picked up by politicians.”

The St-Jacques Syriac Orthodox Church has already sponsored 275 Syrian refugee families to settle in Laval and Sherbrooke, according to the church’s vice-president, Mufid Kano.

He tells Bell Media Canada needs to do more and the government must increase sponsorship limits for organizations looking to help.

“Instead of, for example, admitting 200 to 230 a year, they could increase that to about 300 to 350, which really, really makes a big difference,” he explained.

“We’ve been living this, I would say nightmare, for the last four years.”

According to a recent Angus-Reid poll, 70 per cent of Canadians believe the country should do more to help in the crisis. The same poll shows that Canadians are divided based on political leanings when it comes to how many refugees fleeing war should be brought to Canada.

The Liberal Party of Canada has promised to accept 25-thousand Syrian refugees this year if elected, which leader Justin Trudeau puts at a cost of $100 million.

The Conservatives way they would accept 10,000 additional refugees and ramp up military efforts against ISIS.