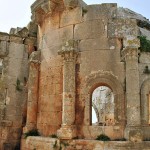 A general view of an old Byzantine church in the Druze village of Loza, in Idlib province. (AFP, File)

Reyhanli – Syria’s extraordinary archaeological heritage has fallen prey to the fighting ravaging the country for more than 18 months, with destruction, theft and systematic looting on the rise.

In a country where corruption and trafficking of archaeological artefacts and treasures was already a chronic problem, widespread clashes and a power vacuum in some areas have led to an explosion of looting and illicit excavations.

“It is obvious that in such situations there is always an increase in looting, illegal excavations and smuggling,” Veronique Dauge of the Unesco World Heritage Centre said by telephone.

Around 32 000 artefacts were looted from 12 000 archaeological sites in Iraq during the chaos that followed the US-led invasion in 2003, and 15 000 items were also looted from the Baghdad National Museum.

The Syrian army has often been accused of participating in the pillaging or tolerating such actions by civilians – often in well organised trafficking bands.

In Reyhanli, a small Turkish village near the border with Syria, a newly arrived Syrian refugee from the famed ancient desert town of Palmyra said the museum there had been looted and reported large-scale theft at the site.

“These are the shabiha, the Assad gangs [militiamen]who do this,” charged Abu Jabal, giving a fictitious name. “The army is there, and oversees everything.”

An amateur video posted online on 17 August shows seven or eight sculptures and busts crammed into the back of a pick-up truck. Soldiers can be seen chatting alongside the vehicle.

“We have studied what our Syrian colleagues are saying, and it is indeed soldiers. Everything leads us to believe that the army is stealing antiquities in Palmyra and elsewhere,” Spanish archaeologist Rodrigo Martin said.

He is the spokesperson for a team of archaeologists, Syrian and foreign, who formed the “Syrian Heritage in Danger” group, whose goal is to monitor what happens at archaeological sites, through a network of informants.

“Some sites have been the scene of fighting, others have been looted, and the military has given digging permits to gangs in exchange for their complicity in the conflict,” Martin added.

“But even if we have many contacts, it is difficult to know what is really going on. We will discover the extent of the damage after the war.”

His organisation has also received testimonies accusing rebel groups of resorting to smuggling in order to finance themselves. “We hear rumours, but it is very difficult to verify these,” he said.

On 12 September, The Times in London published an article in which a Lebanese antiquities dealer said insurgents had assembled groups of clandestine diggers to recover antiquities to finance their uprising against President Bashar Assad.

“The rebels need arms and the antiquities are a good way to buy them,” Abu Khaled was quoted as saying in the article.

In a report entitled “The Syrian archaeological heritage is in danger”, the EU-funded Euromed Heritage organisation emphasises the danger currently posed to Syria’s rich heritage by secret excavations.

“Clandestine excavations have posed a threat to Syrian history and heritage for many years. Unfortunately, current events have significantly increased this risk. Many groups have attempted to conduct secret excavations, starting with the security forces,” the report said.

“The clandestine excavations have become objects of negotiation: They are tolerated by the authorities to anyone who agrees to stay away from the uprising or denounces activists.”

For British archaeologist Emma Cunliffe, another specialist on Syria, what happened in 2003 in Iraq is now being repeated.

“Look at the prices of nice antiquities at auction at Christie’s or Sotheby’s: It’s ridiculous! As long as there is this kind of demand on the international market, the looting will continue.”
– AFP