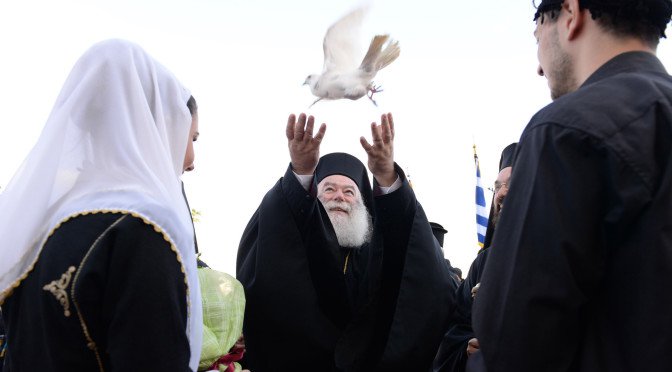 By now, everyone has left Crete. Everything has been wrapped up. My skin, for its part in this, is a shade darker and a shade redder. The Council has ended. But the conciliar process has not.

One of the phrases that is used in the Council documents is “liturgy after the liturgy.” This phrase is meant to capture the manifold ways in which prayer, love, and sacramentality are to shape the whole of life and the cosmos, and not just the experiences we have during liturgical services. After the liturgy each day at the Council, bells would ring. But they weren’t the bells attached to the monastery. These bells hung around the necks of the goats which fed off the mountainside. It was a refreshingly simple sight, peaceful, joyful. A fitting reminder each day of the world for which this Council is held. A reminder of the ‘liturgy after the liturgy.’

The Council may be over, but conciliarity is just beginning. We now enter the long stretch that belongs to the ‘council after the council.’ It is the role of the primates to speak to the world on behalf of the Church. Now they have done so. But the words they have spoken are not the point. The specific phrases of “The Mission of the Church in Today’s World” are important insofar as they call upon the whole Church for a renewed prophetic witness. But more important than that call is the missionary witness itself. It is now up to the body of the Church to fulfill that mission.

This is what I mean by the ‘council after the council.’ Whether this Council is a global turning point in the history of salvation, signalling a new Pentecost which heals the problems of modernism, or if it is just a failed Council depends entirely on the conciliar authority of the whole Church now. By this I mean more than whether the loudest voices begin to preach or denounce this Council. Rather, the real test is the fruit of this Council.

When the Council of Nicaea happened, it was a turning point in the Church. Prior to that, Christianity was divided. Not only had Arianism taken over, but the Church had not gathered in Council before. In the changing landscapes of post-Constantine Christianity, the Church rose to meet the new challenges of the world through Council. A creed was proclaimed, but this creed wasn’t just a formula, it was a confession. The Church came together as one and confessed the faith.

The challenge today is the same. Arianism is not the challenge we face, there are other isms now with which we must grapple- modernism,  ethno-phyletism, nationalism, jurisdictionalism, militarism, consumer capitalism, globalism. All these are addressed in one way in another. In the face of these, it is the duty of the Church again to gather and to confess.

It is now our turn to sit and the conciliar table and to add our voices.

Something shifted in the spirit of the Church during the Council. Each day after liturgy, there was a real camaraderie that developed among those in attendance. The Council began with a formal liturgy where everyone knew their place. The opening session involved prepared speeches. But as the Council wore on, dialogue happened, and friendships broke out. Bridges were erected within the Church, something that has long been needed.

There of course has been intrigue and controversy. There is a lot more about the proceedings of the Council that I could have written about this past week. There are more stories to tell and controversies to be gossiped about.  But that doesn’t interest me so much. It is not the immediate ups and downs of the conciliar process which matters. Rather, it is the Gospel that matters.  The most significant guide for me during my time at the Council was the Gospel. It was instructive to read Christ’s words to love our enemies while I sat waiting to see if the Council would work out its statements on other Christians. It was grounding to read Christ’s call to take the lowest position while awaiting decisions about the diaspora.

Every day there was a press conference, and a liturgy, and at the end there were more speeches. And now we have documents. The whole way there has been speculation and controversy, but the consistent word from the Bishops has been that we should not focus on such things. And I personally found it quite exhausting to keep up to date with each new bit of gossip about the Council. It is better, I think, to recognize this Council as a first step. There may be flaws and controversy, but Moscow has called for another Council, and this Council has called for more. This is the first step in the conciliar process. And it was a good step. As one representative said during the press conference, the bishops were honest and open. They discussed everything from metaphysics to poverty, and the atmosphere was sincere, emotional, and empathetic. It was as if the Holy Spirit really was acting.

In this respect, the discussions are more than the statements. The live voice of the Church, speaking in love and brotherhood, manifests in these real person to person encounters. These encounters constitute the conciliar identity of the Church, for it is only in such an encounter that love can manifest. Now it is the duty of the whole Church to open itself to real, personal interaction. The ‘council after the council’ much like the ‘liturgy after the liturgy’ is simply this space for encounter, for dialogue, for compassion, for co-suffering love.

As I walked down the long, dusty, sun-soaked road that led away from the Orthodox Academy for the last time, I turned and saw about a half dozen goats mulling about the sparsely vegetated hillside. Bells clanged around the necks of each. I paused for a moment and smiled at their presence here, reminding me of the ‘pastoral’ vocation of the Church. They fulfilled their God-given purpose so well. I wonder if we will live up to ours.